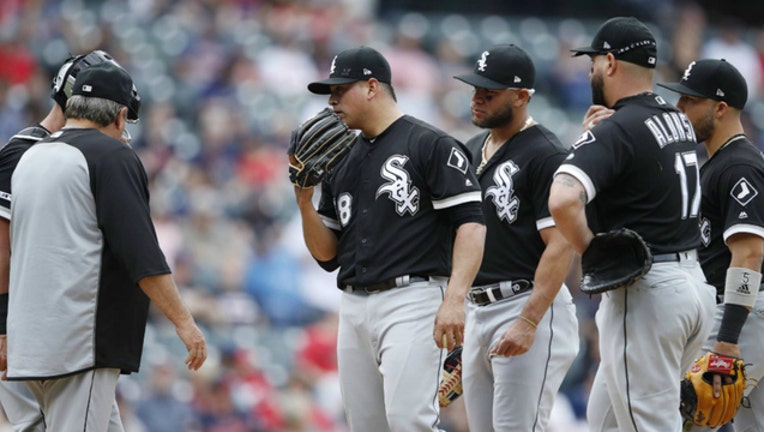 CLEVELAND (AP) - Knowing a heavy rainstorm was on its way, Carlos Carrasco wanted to get through five innings as quickly as possible Thursday.

Even if it meant giving his teammates a nudge.

Carrasco held Chicago to two hits, Jordan Luplow hit his first two home runs of the season and the Indians defeated the White Sox 5-0 in a game that was called after five innings following a rain delay of 2 hours, 34 minutes.

Carrasco was told a day earlier that rain was likely. When Roberto Perez started throwing the ball around the infield following one of the right-hander's six strikeouts, Carrasco quickly put a stop to it.

"I said 'No, just give me the ball,' " he said. "I knew it was going to rain. I wanted to get through the fifth inning."

The rain began to fall steadily in the third and continued before the umpires called for the tarp prior to the top of the sixth as Carrasco was ready to take his warmup pitches.

"I was there, but they came to fix the mound and that's when they put the tarp on," Carrasco said.

The rain stopped and the tarp was briefly pulled after about two hours, and the grounds crew worked on the infield. The tarp was placed back on the field because the radar showed more rain was headed to the area. The game was called at 5:28 p.m. during a heavy rain.

"It is what it is," White Sox manager Rick Renteria said. "Mother Nature is kind of hard to control."

Chicago right fielder Charlie Tilson slipped and fell on the wet grass in the fifth as he camped under a fly ball hit by Francisco Lindor that landed for an RBI double. The play capped a three-run inning.

"Charlie got to the ball," Renteria said. "His left foot lost footing from underneath him. Even the last fly ball that was hit to Nicky, you could see he very cautious making sure that would not happen to him."

Carrasco (3-3) struck out six and didn't walk a batter. The right-hander gave up an infield hit to José Abreu in the first before retiring the next nine hitters. Yonder Alonso doubled with two outs in the fourth, but Carrasco struck out James McCann to end an 11-pitch at-bat.

Luplow hit solo homers in the second and fifth off Manny Banuelos (2-2) helping Cleveland gain a split of the four-game series.

Chicago's left-hander had a rocky second inning in which he gave up a leadoff homer to Luplow, a wild pitch that allowed a runner to score from second base and three walks.

Luplow's first home run landed in the left field bleachers. After two walks, Banuelos' pitch to Tyler Naquin was in the dirt. The ball rolled toward Chicago's dugout and Jake Bauers scored from second standing up before McCann retrieved it.

Banuelos appeared to get hit on the upper part of his pitching arm by Carlos Santana's one-hop grounder to the mound, but remained in the game. He allowed five runs in 4 1/3 innings.

Luplow homered to center with one out in the fifth. Ramirez singled in the first and has reached base in 18 consecutive games, the longest active streak in the AL.

White Sox: OF Leury Garcia (bruised thumb) started for the first time since Monday and was hitless in two at-bats.

Carrasco won the battle against McCann, who is batting .350 for the season and has a .392 average over his past 14 games.

"I threw every pitch - fastball, changeup, slider - everything," Carrasco said. "I threw a slider on the 10th pitch. He took a big swing. Then I went back to another slider for the strikeout."

White Sox: RHP Dylan Covey (0-1, 4.50 ERA) will make his first career start against Toronto in the opener of a three-game series Friday.

Indians: RHP Cody Anderson (0-1, 11.12 ERA) is scheduled for his second start of the season in the opener of a three-game series in Oakland on Friday.