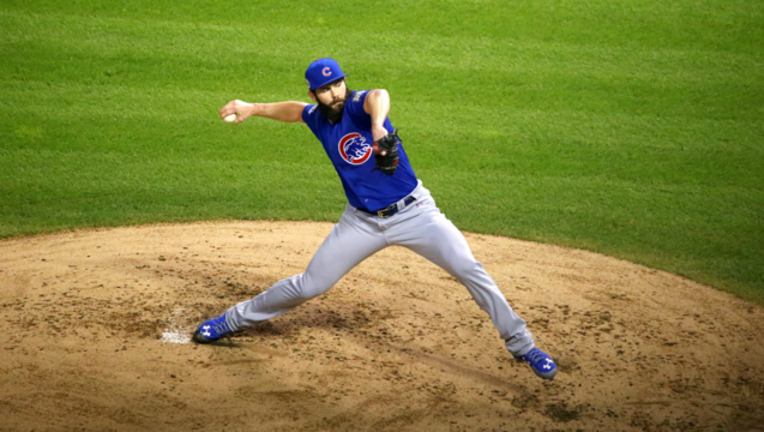 MESA, Ariz. (AP) - Jake Arrieta is hopeful of working out a new contract that would keep him with the Chicago Cubs before he becomes eligible for free agency after the 2017 season, yet he also realizes this could be his final year with the club if talks don't materialize.

The ace right-hander and 2015 NL Cy Young Award winner landed a one-year deal for $15,637,500 last month to avoid salary arbitration. As the reigning World Series champions geared up for the first pitchers and catchers workout, Arrieta insisted Wednesday at the start of spring training that he won't allow his future to be a distraction.

"I think there's an open dialogue there and I believe we will have talks. It's not my No. 1 priority," Arrieta said. "I just wanted to focus on my health and coming into camp as well rested and in as good of shape as I possibly can. If we have those conversations, we'll sit down and hash some things out and see if we can get something worked out. If it happens, great, if not then I'll continue to move forward and take it day by day."

He came to the Cubs in a trade from Baltimore in 2013 and helped them end a 108-year championship drought last fall.

Manager Joe Maddon has no concerns about Arrieta being ready and putting aside his own situation.

"Honestly it could be a positive for him and for us," Maddon said. "Obviously if you're in that year, you're really wanting to put your best foot forward to attract the best contract the next season. We had our meeting this morning with Jake. Again, I've said it all the time, but I'm always impressed with our guys when they walk out the door. He was just all about winning. He's all about making all of his starts, he's all about winning. He said he wants to make all of his starts for the guys in the other room. That's where his mind is at right now."

On Wednesday, Arrieta opened boxes of new shoes and piles of fan mail at his locker before heading into meetings to get started at the Cubs' spring training complex.

"Time flies really quickly. It feels like only a few months ago that I was traded over here and started my career as a Cub in 2013," he said. "I've had some incredible experiences with this organization. I owe a lot to this team and this organization and the ownership. I don't want to see that time come to an end, my time as a Cub. Unfortunately the business side of the game shows its head every once in a while. But I still think there's opportunity and chances that we can have good conversations as far as an extension's concerned."

During a swarmed session with members of the media, Arrieta didn't go into specifics on what he is looking for in a long-term contract. He noted that once at a certain stage, decisions go beyond just the money.

Though he will certainly command a huge payday.

"Financially it's not a big worry for myself individually," Arrieta said. "The less of a distraction that can play on the team and everyone in this clubhouse the better. I don't typically like to verbalize a lot of the things from an individual contract situation just because it can take some attention away from what we're trying to do here collectively. I don't mind addressing and talking about it if those things do come up. Again, my main focus is going to continue to be trying to help these guys as much as I can to prepare for our season this year."