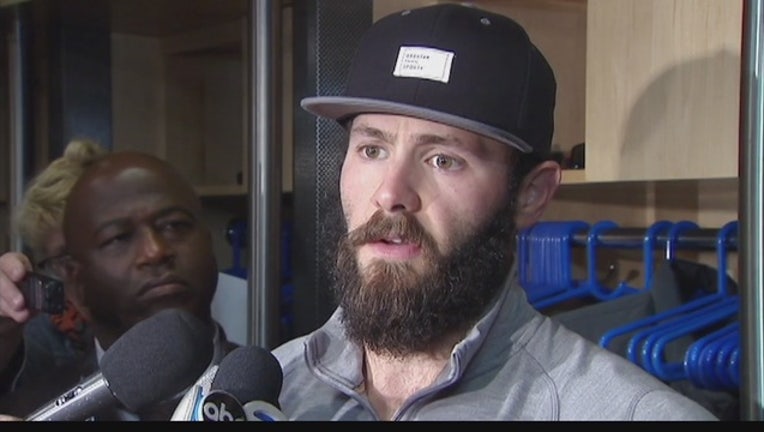 CINCINNATI (AP) - The Cubs got together in one of their hotel rooms and threw a pizza party to celebrate Jake Arrieta's second no-hitter. Maybe it doesn't sound like much, but it's the best they could do after midnight.

Besides, they figure they'll be doing it again soon.

Arrieta allowed only six balls hit out of the infield on Thursday night while no-hitting the Cincinnati Reds 16-0. It was the first no-hitter of the season in Major League Baseball and his second in 11 regular season starts. He also stymied the Dodgers 2-0 on Aug. 30, a highlight of his Cy Young season.

With that, the 30-year-old pitcher joined elite company. He's only the fourth reigning Cy Young Award winner to throw a no-hitter, joining Sandy Koufax (1964), Bob Gibson (1971) and Clayton Kershaw (2014). He's the eighth in history to throw a no-hitter in consecutive seasons — Tim Lincecum was the most recent, doing it in 2013-14.

And he thinks he'll have more chances to make no-hit history.

"I think it's possible, yeah," he said on Friday, after his off-day workout. "I think I'll be in these positions again. But you realize that it takes one broken bat (hit). It's tough. So many things have to go right. But I think I'll have my opportunity again."

When he came to the Cubs as part of a trade that included bonus slots for international players, Arrieta was convinced he'd someday do great things even though he had a losing record and a career 5.46 ERA with Baltimore. Three years later, he's putting together one of the best stretches of pitching in big league history.

And his Cubs are on the rise, too, trading their loser label for the best record in the majors at 12-4 heading into Friday night's game against the Reds. Arrieta leads a pitching staff that expects great things, including the possibility of more no-hitters this season.

"Every time he goes out there, he's got no-hit stuff," Reds outfielder Jay Bruce said. "He's arguably the best pitcher in the game today."

And not just Arrieta. Cubs pitching coach Chris Bosio — who threw the second no-hitter in Mariners history on April 22, 1993 — figures the rotation might have a couple of more in it this year.

"I said in spring training: I think this is the year we're going to get three," Bosio said. "I still believe that. Any given night, any one of these guys can do it. They've shown the ability to take over the game and with the way we're playing defense, who knows? Maybe that number's correct, or maybe it's higher."

The Reds ended their hitless streak when Joey Votto broke his 0-for-19 slump with a first-inning single off Jon Lester on Friday night.

Everybody knows that the Cubs' best chance for a no-hitter comes any time Arrieta is on the mound. The numbers he's compiled since the middle of last season are historically good.

— He has won his past 14 decisions on the road, joining Greg Maddux and Johan Santana as the other pitchers to do that since 1994.

"It's crazy, man, what he's done," manager Joe Maddon said on Friday. "He's always rising to the occasion and he does it in the most confident, humble way I've ever seen."

Arrieta joined Ken Holtzman as the only Cubs to throw a pair of no-hitters since 1900. His two no-hitters within a span of 11 regular season starts are also historically significant. Only Johnny Vander Meer and Warren Spahn had no-hitters closer together. Vander Meer threw back-to-back no-hitters in 1938.

When Vander Meer's feat was brought up Friday, Arrieta made a rare concession.

"I don't expect that," said Arrieta, who will pitch against Milwaukee at Wrigley Field next week. "I try to be good, but that's a little much."