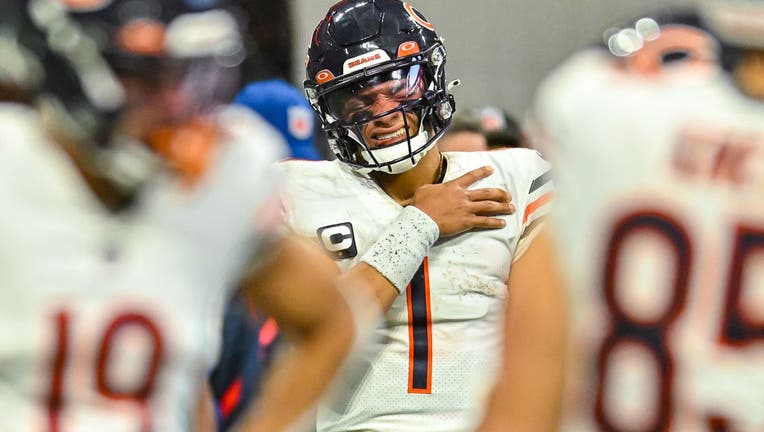 ATLANTA, GA NOVEMBER 20: Chicago quarterback Justin Fields (1) reacts after injuring his shoulder during the NFL game between the Chicago Bears and the Atlanta Falcons on November 20th, 2022 at Mercedes-Benz Stadium in Atlanta, GA. (Photo by Rich von

The New York Jets coach was making a change at quarterback with Zach Wilson out and White tapped to start Sunday at home against the Chicago Bears.

And just like that, the biggest decision so far of the playoff-hungry Jets’ season was sealed.

"Initially, just excited," White said of his reaction. "It’s just what every player in this locker room wants is a chance to compete and prove themselves. But more importantly, it’s just a chance to be a good teammate and help the team and worry about the team first."

The Jets’ decision to bench the underachieving Wilson was framed by Saleh as a mental and physical "reset" for the second-year quarterback. New York is also in the thick of the AFC playoff hunt at 6-4, and would be in the postseason right now after New England’s loss Thursday night to Minnesota.

So this game against the Bears (3-8), who have lost four straight and six of seven, could serve as an opportunity for the Jets to get right after a 10-3 loss at New England last Sunday.

But it won’t be the spicy quarterback matchup most were expecting when the schedule was announced in May with Wilson, the No. 2 pick last year, taking on the Bears’ Justin Fields, who went nine selections later.

Instead, both might be watching from the bench — Wilson because of ineffectiveness and Fields because of injury.

The Bears were still in wait-and-see mode with Fields, who was listed as questionable for the game after being limited at practice all week with what he said is a separated left shoulder with ligament damage within the AC joint. While it’s to his non-throwing shoulder, Fields was still feeling some pain early in the week during his follow-through.

"It’s just some movements that I do with my arm, it hurts it," Fields said.

If Fields sits, the Bears will start Trevor Siemian against the Jets — a team for which the veteran made one start in 2019 before a season-ending ankle injury.

"He has great functional intelligence to be able to operate the offense," Bears coach Matt Eberflus said of Siemian. "And he’s familiar with the offense."

Saleh said the Jets have been preparing all week to face Fields. But they’ll also be ready for Siemian.

While the Jets’ offense has struggled lately, the defense has been a force in recent weeks — especially the pass rush.

New York sacked New England’s Mac Jones six times last Sunday to give the Jets 32 on the season, one fewer than they had in 17 games last year. They have 17 sacks in their last three games. Their 58 quarterback hits since Week 4 lead the league.

Defensive lineman Quinnen Williams has a career-high eight sacks to pace the Jets, who are the only team in the NFL to have multiple games this season with at least six sacks and eight tackles for loss.

"I can’t really say too many bad things about what we are doing as far as pass rush," said John Franklin-Myers, who has 3 1/2 sacks. "We expect to win every one-on-one."

When it comes to late-game drives, the Bears keep veering off course.

They have failed on five straight two-minute drills, including Fields getting picked off against Atlanta last week. And in the past three games, they’ve been outscored by a combined seven points.

"We’ve lost a lot of close games," running back David Montgomery said. "I can’t go back and change it. All I can really focus on is today, right now, what I can do to make myself better so I can make everybody else around me better so that we all can come together and keep the morale high so that we can be what we are capable of being."

The Bears held Atlanta to 131 yards passing last week after giving up an average of 257 over the previous three games. It was the third-fewest they’ve allowed this season.

One thing that helps is having cornerback Jaylon Johnson healthy. He had been slowed by an oblique issue after missing time early in the season because of a quadriceps injury.

The Jets are inducting former cornerback Darrelle Revis into their Ring of Honor during a halftime ceremony.

Revis follows former teammates Nick Mangold and D’Brickashaw Ferguson to be honored by the team this season. The four-time All-Pro, who played for the Jets from 2007-12 and again from 2015-16, was selected earlier this week as one of 28 modern day semifinalists for the Pro Football Hall of Fame’s class of 2023.

Jets rookie Sauce Gardner, who leads the NFL with 14 passes defensed, has drawn early comparisons to Revis for his ability to regularly shut down wide receivers.

"The sky’s the limit for him," Revis said. "I love his game. ... I think he can take on that legacy as being a New York Jets great."