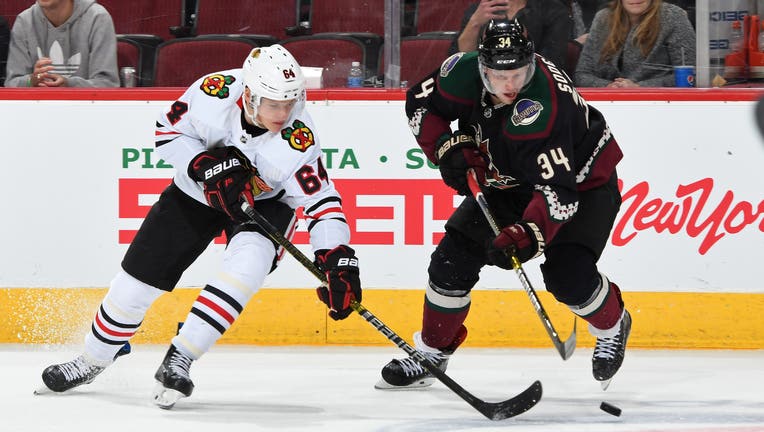 Carl Soderberg #34 of the Arizona Coyotes and David Kampf #64 of the Chicago Blackhawks battle for control of the puck during the third period of the NHL hockey game at Gila River Arena on December 12, 2019 in Glendale, Arizona. (Photo by Norm Hall/N

GLENDALE, Ariz. - It took Brad Richardson until Thursday night to score his first goal of the season, but it came in a win that gave the Arizona Coyotes sole possession of first place in the Pacific Division.

Richardson had a goal and an assist, Clayton Keller scored twice and the Coyotes jumped out to a comfortable early lead on their way to a 5-2 victory over the Chicago Blackhawks.

“I could have a lot more goals than I do. I’ve had so many Grade-A chances, I’m just not getting enough lucky bounces,” said Richardson, now in his 15th NHL season. “I try to do other things to help the team.”

Vinnie Hinostroza, playing against his former team, assisted on all three of Arizona’s first-period goals to match his career high for points in a game. He became the first Coyotes player in more than a year to have three assists in a single period.

“We limited their chances for the most part,” Hinostroza said. “It’s always nice to do that against your old team.”

Michael Grabner and ex-Blackhawk Nick Schmaltz each added a goal for the Coyotes. Christian Dvorak had two assists and Keller tied a franchise record with 12 shots on goal during Arizona’s fourth victory in six games.

Jonathan Toews and Dylan Strome, the Coyotes’ top draft pick in 2015, scored for the Blackhawks, who lost their third straight.

The Coyotes had lost four of their past five home games. But they beat Chicago for the second time in five days and have won five of the last six meetings overall.

Darcy Kuemper made 28 saves for Arizona. Robin Lehner stopped 35 shots for the Blackhawks.

“First time playing the old team and you get two wins in five days,” said Schmaltz, who came to Arizona in a November 2018 trade that sent Strome to Chicago. “That’s exciting and I’m just happy we could get a win on home ice for our fans.”

Arizona got off to a flying start with two goals on its first four shots. Richardson fed Grabner with a long pass between the blue lines and he sped past a defender to get enough space for a backhand that found the net just 2:56 into the game.

Speed and a long pass were the difference again on the second goal, at 5:03 of the first. Jordan Oesterle sent a pass out of his own zone up the ice that Hinostroza deflected to Keller on a rush. Keller scored and crashed hard into the boards after his sixth of the season.

“It’s a difficult team to come back on, a very well-structured team,” Lehner said. “I think we are giving up really easy chances. We have to work really hard for ours and not the other team. It’s not a good combination.”

Richardson got his goal at 15:04. He knocked down an elevated shot from Jakob Chychrun in front of the net, and it slid between Lehner’s legs for a 3-0 lead.

Toews put in the rebound of Dominik Kubalik’s shot at 6:02 of the second period to make it 3-1. Schmaltz answered at 8:25, taking the puck off a draw, maneuvering it away from Patrick Kane and firing it into the net.

Strome scored on a power play in the third, then Keller lifted a backhand high into the net with 2:07 to play.

NOTES: Chicago placed D Calvin de Haan on injured reserve with a right shoulder injury. De Haan, who had offseason surgery on that shoulder, was injured during Tuesday night’s 5-1 loss at Vegas. ... D Olli Maatta returned after missing the past four games with an illness. ... Coyotes C Barrett Hayton was scratched, but the team said the 19-year-old will be loaned to Team Canada for the World Junior Championship from Dec. 26 to Jan. 5 in the Czech Republic.

Blackhawks: At the St. Louis Blues on Saturday night.