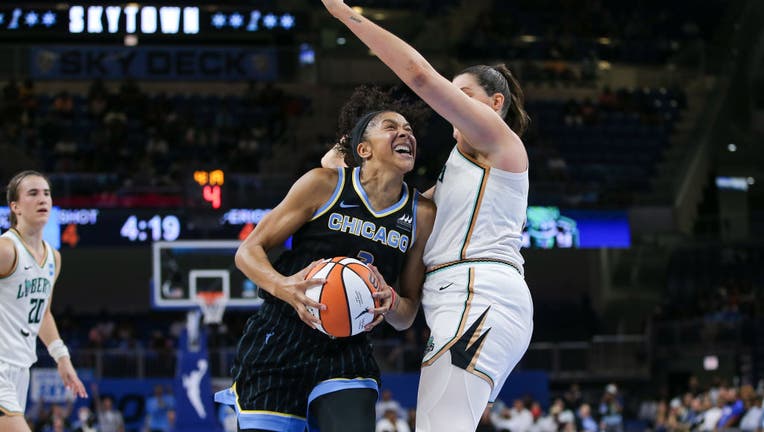 CHICAGO, IL - AUGUST 17: New York Liberty center Stefanie Dolson (31) guards Chicago Sky forward Candace Parker (3) as she drives to the basket during the second half of a WNBA first round playoff game between the New York Liberty and the Chicago Sky

New York scored the final 13 points of the fourth quarter as Chicago missed 10 of its last 11 shots. Ionescu made a 3-pointer and a jumper from the free-throw line during the run, and Marine Johannes highlighted the spurt with an over-the-shoulder pass to Howard.

"We’ve been in this situation all year and early on we were losing these games," Ionescu said. "But we found out what it takes to win and we showed that tonight. We gotta do it again."

New York, which won its first playoff game since Sept. 23, 2015, will play Game 2 of the best-of-three series at Chicago on Saturday.

Betnijah Laney added 17 points and Stefanie Dolson scored 13 points for New York, which set a franchise scoring record in the playoffs. Dolson, a center, made 3 of 4 3-pointers to help the Liberty go 11 for 25 from distance.

Chicago took its first lead of the second half, 74-73, with a second left in the third quarter on Emma Meesseman’s layup. Quigley sank a 3-pointer while being fouled and she made the free throw to give Chicago an 85-81 lead, and Parker added a putback on the Sky’s next possession for a six-point lead with 6:36 left.