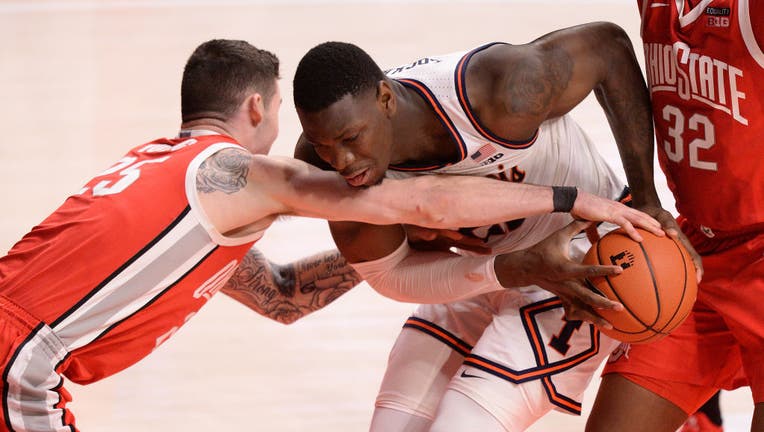 The game was especially physical in the second half. One technical was called, on Ohio State’s Duane Washington Jr., and the officials had to step in many times to avoid fights.

"We had tremendous respect for this Illinois team and came in knowing they were coming off a tough loss (to unranked Maryland)," Ohio State coach Chris Holtmann said. "It’s obviously a win we feel proud of and are excited about."

On the Buckeyes’ inbound pass, replays showed Washington clearly stepped out of bounds with the ball. But a foul was called on Trent Frazier and Washington sank both free throws to make it 85-81.

"I didn’t get a chance to look at it," Illinois coach Brad Underwood said. "It’s not a reviewable play anyway."

Ohio State scored 10 straight points for a 10-2 lead. In a first half marked by runs and inconsistent play, the Buckeyes led 43-28 at the break.

Liddell and Cockburn jostled and shoved each other all game. Several times they exchanged heated words.

"Kofi needs to get used to that," a clearly frustrated Underwood said. "I have to give (Ohio State) credit. They came in here and smacked us in the mouth."

"Kofi is a fast dude. He gets position really well. He’s really good," Liddell said of the 7-footer from Jamaica. "Our focus was the defensive end. We did everything on defense, got stops, so that helped our momentum on offense."

Liddell and Ohio State managed to confound Illinois big man Cockburn for most of the game. It was arguably the worst half for Illinois this season, other than perhaps the Jan. 7 Northwestern game, when Illinois also trailed by 15 before rallying to win.

"There will be some rough meetings this week," Underwood said. "We can’t have anymore of these flat, lifeless, noncompetitive games. We’re one of the best teams in the country and we need to start showing it."

Ohio State: After a tough win on the road, expect the Buckeyes to move up in the rankings.

Illinois: Will likely fall several slots after another conference loss and a 66-63 defeat at unranked Maryland last Sunday.