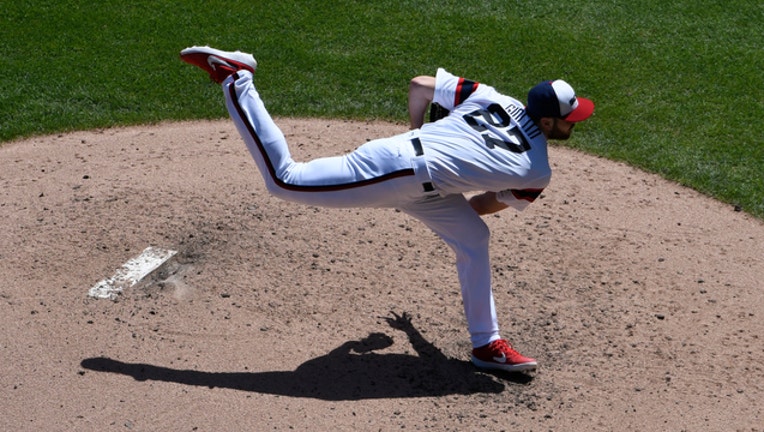 CHICAGO (AP) - Lucas Giolito was lost at the end of last season. He found himself in the work.

All the time he spent on a new motion.

All the bullpen sessions with his new catcher.

All the innings that paved the way to right now.

"It's fun to finally be able to do what I know I've been capable of," Giolito said. "I just haven't shown it."

Right when it looked as if he might be another failed prospect, a costly mistake for the rebuilding Chicago White Sox, everything came together for the 24-year-old right-hander.

Giolito has been one of baseball's best pitchers since the beginning of May, going 6-0 with a 1.03 ERA in his last six starts. Relying mostly on a fastball that sits in the mid-90s and a terrific changeup, he has struck out 48 and walked eight during his win streak.

"He's pitching with a lot of confidence," manager Rick Renteria said. "I think he's pitching (well) because he knows he's becoming who he is. He's trusting it and he's letting it happen."

Giolito's dominant run includes a four-hitter at AL West-leading Houston that was Chicago's first complete-game shutout since Chris Sale went the distance in a 1-0 win at Tampa Bay on April 15, 2016. With the White Sox looking to close out their first 6-1 homestand since 2010, Giolito struck out nine in 7 1/3 innings in a 2-0 win against Cleveland on Sunday.

"These last six, seven starts he's really been on the offensive and making hitters feel like they have their backs against the wall," catcher James McCann said.

Giolito's ace-worthy performance of late is what Chicago was hoping for when it acquired the 6-foot-6 Southern California native in the December 2016 trade that sent Adam Eaton to Washington. Giolito had been regarded as one of the majors' top pitching prospects since he was selected by the Nationals with the 16th overall pick in the 2012 amateur draft.

He made his White Sox debut in August 2017 and showed promising signs down the stretch. But last year was a disaster.

After a winless September, Giolito decided it was time for a change.

"A lot of it's just like a feel thing and I never felt like myself, like how I knew myself from years ago," he said. "So I just went back and with the offseason, I'm like, 'You know what? What I've been doing's not working. Let's try something new.'"

Giolito's biggest adjustment is a new motion that has paid huge dividends already. He has surrendered just 20 walks in 67 1/3 innings this year, and lefty hitters are batting just .174 against him after they had a .271 average last season.

"Just more compact, athletic," Giolito said of the changes. "Arm action's shorter, so less time for error. So like when my front foot strikes the ground and the power and the weight transfers, my arm is in a more ready-to-fire position than it has been in the past."

Giolito, who was named May's AL Pitcher of the Month on Monday, also bonded with McCann after the White Sox signed the free-agent catcher to a $2.5 million, one-year contract in December. He has lavished praise on McCann for his work behind the plate, including his help with speeding up his tempo on the mound.

But much of Giolito's development is just the product of experience. Knocked at times for being almost too cerebral, Giolito has learned what works for him.

"There's times where, I wouldn't say it's being too smart, I'd say it's being too methodical, analytical, thinking too much about things that you don't have to think about," he said. "I think that's when there can be downfalls, and that's what I experienced last year.

"For me, it's always easier when I can shut the brain off and just work, let my body work."