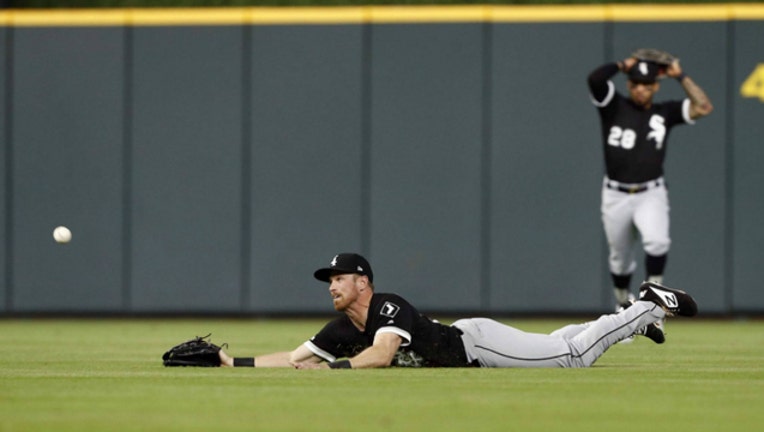 Playing without George Springer, who leads the American League with 17 homers, the Astros got pop from the bottom of the lineup to give them at least one homer in 17 straight games. They've piled up 40 home runs in that span, and the two long balls Monday night helped them to their 11th win in 12 games.

Peacock (5-2) allowed two hits and fanned nine in five innings for his third straight win. He has allowed just two runs combined in his last three starts after giving up 11 combined in his previous three outings. Ryan Pressly pitched a scoreless eighth to extend his MLB-record streak of appearances without allowing a run to 40, and Roberto Osuna gave up a hit in the ninth, preserving the shutout and earning his 12th save.

The Astros bounced back for their eighth win in a row against the White Sox after a 4-3 loss to the Red Sox on Sunday snapped a 10-game winning streak. Houston has the best record in the majors at 32-16 after going 14-4 this month.

The White Sox used five pitchers on a bullpen day which began with Ryan Burr (1-1), who had made 22 relief appearances in two seasons with the team, but whose last start came at Arizona State on Feb. 23, 2014. He allowed one hit and one run - which was unearned, in two innings.

He walked Alex Bregman with one out in the first before a single by Michael Brantley. Right fielder Charlie Tilson made an error on Brantley's hit to allow Bregman to reach third. The Astros took a 1-0 lead when Bregman scored on a sacrifice fly by Carlos Correa.

Jace Fry took over for Burr to start the third and Marisnick sent his first pitch sailing over the seats in left field for his fifth homer to make it 2-0.

Jose Ruiz was pitching with one out in the fourth when White's first home run of the season pushed the lead to 3-0.

Astros: INF Aledmys Diaz is expected to return on Tuesday after missing the last two games with a sore left hamstring. ... 2B Jose Altuve, who has been out since May 10 with a strained left hamstring, took batting practice on the field on Monday and could be headed for a rehabilitation assignment soon. ... Springer, who left Sunday's game with stiffness in his lower back, had an MRI on Monday which was negative, and manager AJ Hinch said he should return in a day or two.

White Sox: OF Eloy Jimenez was reinstated from the 10-day injured list before Monday's game, taking the roster spot of OF Nicky Delmonico, who was optioned to Triple-A Charlotte on Sunday. Jimenez has been on the injured list since April 28 after sustaining a high ankle sprain two days earlier.

White Sox: RHP Dylan Covey (0-2, 4.41 ERA) will start for Chicago on Tuesday. Covey did not factor in the decision after allowing two hits and two runs in 5 2/3 innings against Toronto in his last start.

Astros: RHP Justin Verlander (7-1, 2.38) is scheduled to start for Houston on Tuesday. Verlander yielded two hits and one run in seven innings against Detroit for his third straight win the last time out.