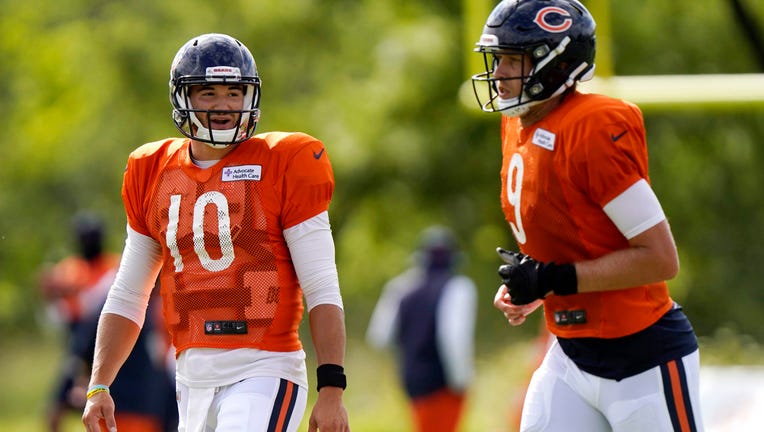 LAKE FOREST, Ill. - Chicago Bears coach Matt Nagy saw a different version of Mitchell Trubisky than he has in the past.

The explanation Nagy offered Sunday for selecting Trubisky over Nick Foles in the Bears’ quarterback competition had more to do with Trubisky’s strides as a quarterback than any disadvantage Foles faced from a lack of offseason work in the team’s offense because of the league’s COVID-19 restrictions.

“In the end, Mitch won the job and I think that’s very important for him, for us, for everybody, to understand, that he worked really hard to get to this point,” Nagy sad. “We know that we all, in a lot of different areas, struggled in 2019.

“And so what I think was most impressive, from the end of the season until this past weekend, was to be able to see some of the growth in practice and off the field that Mitch had.”

Nagy confirmed an ESPN report from Friday and on Sunday selected Trubisky his starting quarterback for this season.

Foles had come over in a trade for a fourth-round draft pick with Jacksonville after Trubisky struggled last year and saw his passer rating decline from 95.4 to 83.0. The decision comes after an offseason when Trubisky’s fifth-year contract option was declined by the Bears.

Neither of those situations seemed to deter Trubisky.

“I’m a believer that everything happens for a reason one way or another,” Trubisky said. “So them not picking up my option, bringing in competition, I truly believe it was just a part of my journey and something I had to deal with in order to get better.

“I believe the way you deal with things is going to determine how it builds you up and it only makes you better in the long run. I just accepted it as a challenge.”

The improvement Nagy saw in Trubisky manifested itself in different forms on the field.

“For him, I thought he really finished strong, which was good,” Nagy said. “To finish strong with some really accurate throws in the red zone, he did some things. I told you all along his footwork has been much better in the pocket, in regards to staying up in that pocket and hitching up there. Decision-making has been improved.

“So we’re always working to try to get that better, and he knows that. You could feel the command. And I think the difference in the command that I felt, and that our coaches felt, was, it’s one where it’s very natural. It wasn’t made up. It wasn’t being told from somebody how to act. It was just very organic, and you can tell that with guys, when they are natural with that.”

Foles had described the quarterback competition as difficult because learning the offense was “expedited” during an offseason with no on-field work because of COVID-19.

“Now that I look back, I think that that probably affected some things,” Nagy said. “And then you have a short summer with training camp as well, with reps. But that doesn’t discredit or take anything away from Mitch.”

Foles was the backup to Carson Wentz in Philadelphia in 2017, but led the Eagles to the title in Super Bowl 52 with a 41-33 win over New England. He was the backup the next season when another injury to Wentz forced him back on the field and he led the team to a 16-15 playoff win over the Bears at Soldier Field.

So the backup role isn’t unfamiliar to him. He congratulated Trubisky with a phone call afterward.

“The thing I’ve been really impressed, just watching him from a physical standpoint, is his ability to throw the ball on the run,” Foles said of Trubisky. “I think he does a really nice job. In person, he’s one of the better quarterbacks I’ve seen with his accuracy throwing on the run.

“I think, just personality-wise, I really just enjoy being around him, just from a personal standpoint. He’s a guy that’s easy to work with, and sometimes in QB rooms that’s not always easy.”

NOTES: Bears running back David Montgomery was on the field for Sunday’s practice. He had been out since Aug. 26 because of a groin strain. Nagy said he was not going to comment on Montgomery’s playing status until injury reports come out on Wednesday. ... Outside linebacker Robert Quinn and cornerback Kyle Fuller missed Sunday’s practice without an explanation from the team.