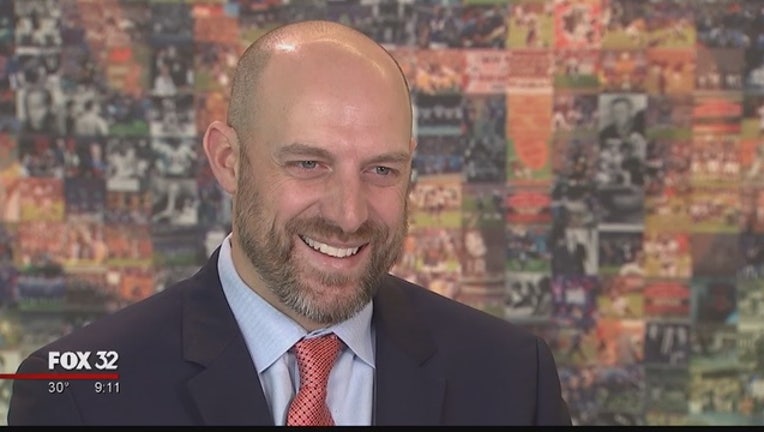 LAKE FOREST, Ill. (AP) - As the interview unfolded, Matt Nagy could sense the Chicago Bears were a fit for him.

He saw a franchise poised to make a big jump, sensed a connection with general manager Ryan Pace.

"I'm here because of the organization and the direction," Nagy, the Bears' new coach, said. "I could feel that from the moment I was in that interview process."

Getting to work with quarterback Mitchell Trubisky is "a benefit."

The Bears introduced Nagy on Tuesday, a day after he was hired as the team's 16th head coach to replace the fired John Fox and help a charter NFL franchise emerge from one of its worst runs.

He takes over a team that missed the playoffs for the seventh straight season and hasn't finished above .500 since Lovie Smith got fired after going 10-6 in 2012. The Bears are on their third head coach since then, with Nagy trying to do what Marc Trestman and Fox could not.

Both got fired with losing records, Fox's 14-34 mark over three seasons giving him the second-worst winning percentage in team history. Chicago went 5-11 this past season on the way to its fourth straight last-place finish in the NFC North.

A day after his first season as the Chiefs' sole offensive coordinator ended with a playoff collapse against Tennessee, Nagy spent 4½ hours interviewing with Pace, president Ted Phillips and chairman George McCaskey at a hotel on Kansas City's Plaza on Sunday morning. He and Pace, along with their wives, also had dinner that night.

In between, he met with the Colts and returned to the Chiefs' practice facility for exit interviews.

"When I went into this interview in that room it felt... it's a special feeling," Nagy said.

"(Pace and I) walked out, we just had a conversation among the two of us and you just kind of knew that this could be really good. Again, I'm going to be right there by his hip."

There are some big holes on offense, particularly at wide receiver.

But the Bears have two solid running backs in Jordan Howard and Tarik Cohen, not to mention a quarterback they drafted with the No. 2 overall pick after trading up a spot with San Francisco to grab him.

A former quarterback at Delaware who played in the Arena Football League, the 39-year-old Nagy spent the past 10 years working under Andy Reid in Philadelphia and Kansas City.

Though he didn't start calling plays until late in the season, he has drawn praise for his work with Alex Smith.

Nagy has also come a long way, from working in real estate while serving as a coaching intern with the Eagles during training camp in 2008 and 2009. Reid hired him as a coaching assistant during the 2010 season, and he's continued to work his way up.

That wasn't lost on Pace. Nor was this: Nagy didn't shy away from what happened against Tennessee on Saturday.

He owned up to it during his interview with the Bears the next day.

On Tuesday, Nagy said he called "every single" play - not Reid - when the Chiefs got blanked in the second half and blew an 18-point lead.

"For me, that was a failure in my book," Nagy said. "But I'll grow from it, and I'll learn from it, I promise you that, and I'll use it as a strength here for me with the Chicago Bears."

Nagy said he will call plays on offense in Chicago. He also said he's not sure if defensive coordinator Vic Fangio will stay or if the Bears will continue to run a 3-4 defense.

That the Bears hired an offensive coach was hardly surprising given how much they have riding on their quarterback's development.

Pace had said they were considering involving Trubisky in the search, but he was not in the interview with Nagy.

The two are, however, familiar with each other. Kansas City interviewed Trubisky at the combine and had him visit prior to the draft.

"I had an opinion of Mitch (at the combine) where he was kind of introverted and I felt scripted, which 95 percent of the guys are in that atmosphere," Nagy said.

"But we went ahead and took several quarterbacks that we were interested in and brought them in and basically had them for six or seven hours and let their personalities show, let them be who they are just in front of us. After six hours of being with Mitch, it was unbelievable."