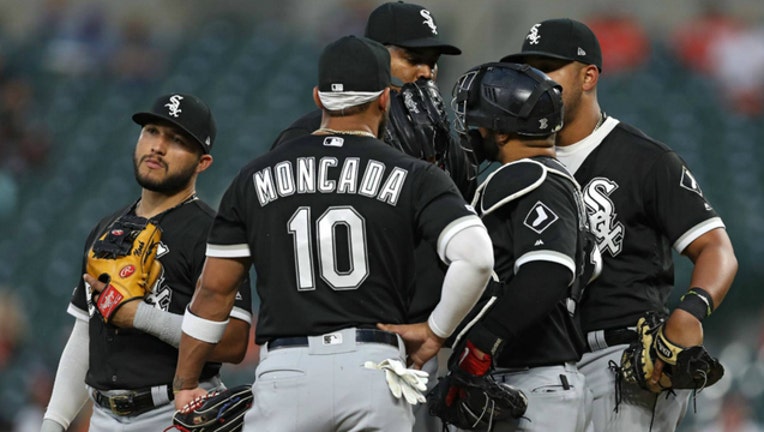 BALTIMORE (AP) - During a season already littered with poor pitching performances and lopsided defeats, the Baltimore Orioles altered the script with an impressive display of pitching, offense and defense.

Renato Núñez, Chris Davis and Joey Rickard also connected for the Orioles, who improved their home record to 2-10 before a cozy, appreciative crowd of 8,953.

Andrew Cashner (4-1) gave up one run, five hits and a walk over seven innings to win his fourth straight decision. Just as important, he provided much needed rest to a bullpen that was drained in a 12-2 loss to Chicago one night earlier.

"That was a veteran pitcher on the mound, knowing what our club needed and delivering," manager Brandon Hyde said.

The defense was stellar, too.

Returning from a one-day absence with a strained quad, Smith made a perfectly timed, high-flying catch at the wall in left field to rob Adam Engel of a two-run homer in the second inning. One inning later, right fielder Trey Mancini made a leaping, backhand grab of a liner by José Abreu.

"We played really well all three phases tonight," Hyde said. "One of our better efforts of the year."

Nova (0-3) yielded nine runs over four innings. Obtained in an offseason trade with Pittsburgh, the right-hander has an 8.42 ERA over five starts and has given up 11 hits in each of his last two outings.

"I missed location with all my pitches tonight," he said. "I threw the ball out over the plate a lot and I got hit."

After Núñez hit a solo shot in the third, Rio Ruiz singled and Davis hit his second home run of the season - the first at home since Aug. 24 - for a 4-0 lead.

In the fourth, Smith followed singles by Jonathan Villar and Mancini with a long drive to right , and Rickard connected one out later with a man on.

That would be Nova's final inning.

"We needed him to give us some innings, but it was a pretty offensive fourth for them," manager Rick Renteria said. "He had driven his pitch count up and at that point we needed to settle everything down."

Renteria remains hopeful that Nova will get on track.

"Obviously he got into a little trouble tonight, had quite a few misses," the manager said. "A tough day, one I'm sure he will put behind him."

Coming into the game, Baltimore surrendered a major league-high 59 homers and hit only 26. On this night, the Orioles turned it around.

"We've shown some flashes of being really good in some certain areas and I just think we've been really inconsistent," Cashner said. "If we can be more consistent, we'll be a pretty good ballclub."

LEARNING ON THE JOB

Hyde went to the postseason four straight years before becoming a rookie manager with the Orioles, and now he's trying to make something good happen in Baltimore. "We're trying to develop winning players," Hyde said. "We're just scratching the surface. We've had a lot of guys who haven't won in the big leagues and haven't had a ton of success in the big leagues. But we believe in them and we're going to stay with them."

Orioles: RHP Nate Karns (forearm strain) threw a side session Tuesday and hopes to resume his rehabilitation stint with Triple-A Norfolk this week.

Orioles: LHP John Means (2-2, 1.72) plays the role of an opener for the third time this season. He lost his previous two starts despite allowing only a total of two earned runs in eight innings.