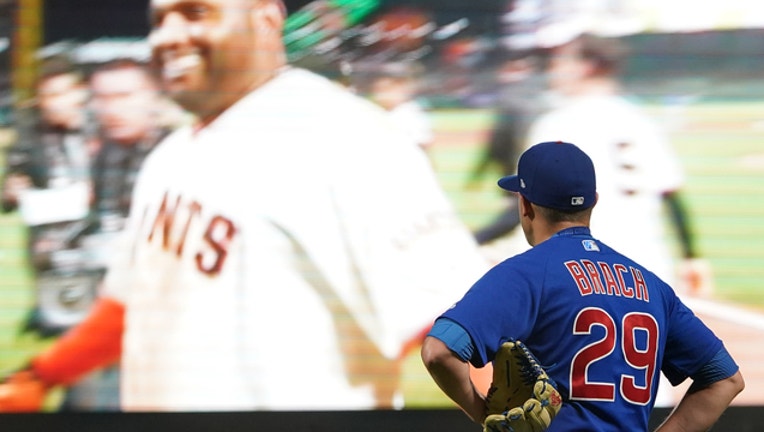 Brad Brach of the Cubs stands and looks on after giving up a solo walk-off home run to Pablo Sandoval in the bottom of the 13th inning at Oracle Park on July 23, 2019 in San Francisco, California. (Photo by Thearon W. Henderson/Getty Images)

That constant trade speculation is what he means - something he considers "just noise."

Pablo Sandoval homered with one out in the 13th inning, sending the San Francisco Giants past the Chicago Cubs 5-4 on Tuesday night long after Bumgarner's night was done.

Sandoval just cleared the left-field fence with his first-pitch drive off Brad Brach (3-3) that went to replay and was upheld to formally finish the 3-hour, 45-minute game.

Sam Coonrod (1-0), San Francisco's fifth reliever, pitched the 13th for his first career victory. The Giants had missed a chance in the 10th when Sandoval grounded out with the bases loaded.

The Panda told himself after that one, "You're a better hitter than that," then delivered to end it.

Bumgarner struck out seven over seven innings in another strong start without a win to show for it, then San Francisco won playing its fifth extra-inning game in the last eight and fourth of the homestand. The Giants had a 16-inning victory Bumgarner's last time out.

Jason Heyward hit a tying single in the eighth for the Cubs, who have lost 10 of the last 14 in San Francisco.

Bumgarner, 9-2 in 14 career starts against the Cubs, dueled with Yu Darvish after the Cubs right-hander had worked six scoreless innings in each of his past two outings.

The Giants' recent turnaround has raised questions about whether San Francisco will try to trade Bumgarner after all if the club believes it can legitimately contend down the stretch.

Not that MadBum or manager Bruce Bochy has shown they're at all concerned about what's next. They just want to keep winning - and that might just take care of Bumgarner's status itself, if the Giants can play themselves back into the playoff mix.

"I haven't even thought about it, just like he said the same thing," Bochy said.

Fans certainly showed their appreciation with regular ovations again and Bumgarner said, "This is a special place to me, it always will be."

"His competitive nature is the primary ingredient for me," Cubs manager Joe Maddon said. "He competes as well as any major league player competes."

The star left-hander's image looms large on a banner hanging high on the left-field facade outside Oracle Park, a symbol of his huge importance to the Giants for more than a decade and of course as 2014 World Series MVP. The poster reads, "It doesn't get more SF."

Whether that means he's still wearing his No. 40 orange and black jersey beyond next week is still to be seen - and Bumgarner also can block a trade to certain clubs if he chooses.

"I don't care about that. Nobody in here cares about it," Bumgarner said. "We're trying to win games, we are winning games and that's all that matters is us. That other stuff's just noise."

Kris Bryant hit a pair of RBI singles for the Cubs. He singled in the first as the Cubs went ahead only for San Francisco to tie it in the second on Mike Yastrzemski's sacrifice fly.

Bryant singled again in the third before Alex Dickerson tied it at 2 with a solo homer in the fourth. Kevin Pillar then hit a go-ahead two-run double three batters later.

"These last couple of games we scored four runs both games," Maddon said. "It's frustrating in a sense but we do have to be more offensively."

"It's probably the best stretch I've been a part of," Bumgarner said.

San Francisco expects to win again, even the close ones that go the distance and then some.

Bochy, who reiterated Tuesday he will retire after the season, ended his postgame press conference with a smile and this gem: "You guys like extra-inning games? You've come to the right place."

Former Giants manager Dusty Baker was in attendance on African-American Heritage Night. Baker hung out behind the cage during batting practice and signed posters.

Home run king Barry Bonds also was at the ballpark in a jersey shirt.

Giants: 3B Evan Longoria (left foot plantar fasciitis) took groundballs and did some hitting in the cage and could soon begin doing some running and hitting on the field as he progresses. ... RHP Johnny Cueto (Tommy John surgery) will face live hitters Wednesday in Arizona. He is still considered a strong possibility to pitch in September, Bochy said. ...LF Alex Dickerson was back in the lineup after two days not starting as he nursed a tight back.

Lester (9-6, 3.87 ERA) is coming off a no-decision last Friday against the Padres in which he was tagged for 12 hits, matching the most he has allowed in his career. He is 5-1 with a 2.00 ERA in six career regular-season starts against the Giants.

Giants starter Tyler Beede (3-3, 4.70) owns a 1.66 ERA in July. The right-hander will face the Cubs for the first time having pitched a career-high eight innings Friday against the Mets.