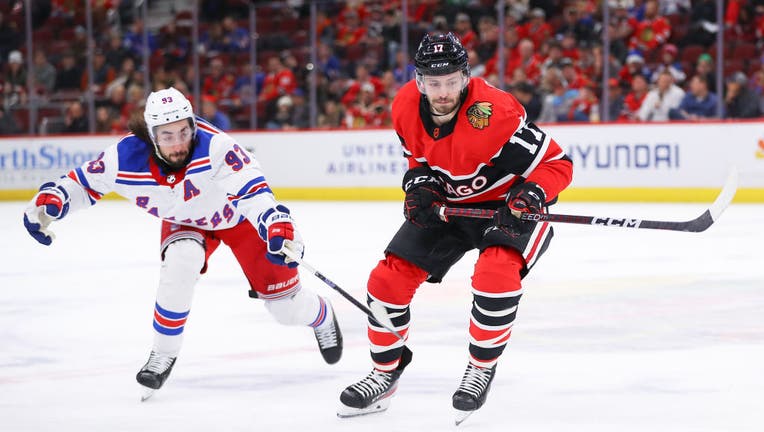 CHICAGO - Artemi Panarin had a goal and two assists, Igor Shesterkin stopped 29 shots and the New York Rangers beat the Chicago Blackhawks 7-1 on Sunday night for their seventh straight win.

Vincent Trocheck, Filip Chytil and Kappo Kakko each had a goal and an assist, and Vitali Kravtsov, Braden Schneider and Jacob Trouba also scored for the Rangers. Adam Fox had three assists, and Alexis Lafreniere and Mika Zibanejad each had two.

The Rangers have not lost since a 5-2 defeat at home to the Blackhawks on Dec. 3. Chicago has lost seven straight since then and is 1-14-1 since mid-November.

Kurashev got the Blackhawks on the scoreboard at 1:33 of the second with a shot that deflected off Trouba’s stick and in for his fourth.

Trouba scored his second nine minutes later to restore the Rangers’ three-goal lead and Trocheck converted on a power play for his 11th with 16 seconds remaining in the period to make it 5-1.

Kravtsov’s second of the season on a breakaway made it 6-1 at 8:56 of the third. Chicago defenseman Caleb Jones, pursuing Kravtsov on the play, dove after the Rangers’ forward and ended up sliding into Soderblom. The goalie was shaken up but remained in the game.

Schneider capped the scoring with his fifth with 6:23 left.

The Rangers have outscored opponents 33-14 during their winning streak. ... Panarin has 18 points in his last 13 games, while Trocheck had 10 points in his last seven. Chytil has six points in six games since coming back from a lower-body injury. He was checked hard by Sam Lafferty early in the second period and did not return.

Shesterkin improved his road record to 9-0-1, becoming the 11th goalie in NHL history to open a season with points in his first 10 road games.

Blackhawks forwards Jonathan Toews and Patrick Kane were in the starting lineup to mark their 1,000th game together, the 11th such pair in NHL history to reach the milestone. Chicago is 530-347-123 in those games. If they stay with the team, they could match defensive pair Brent Seabrook and Duncan Keith, in the same lineup for 1,069 games early next season. However, Toews and Kane are both in the last year of $10.5 million contracts and it’s possible one or both could ask for a trade to a contending team.