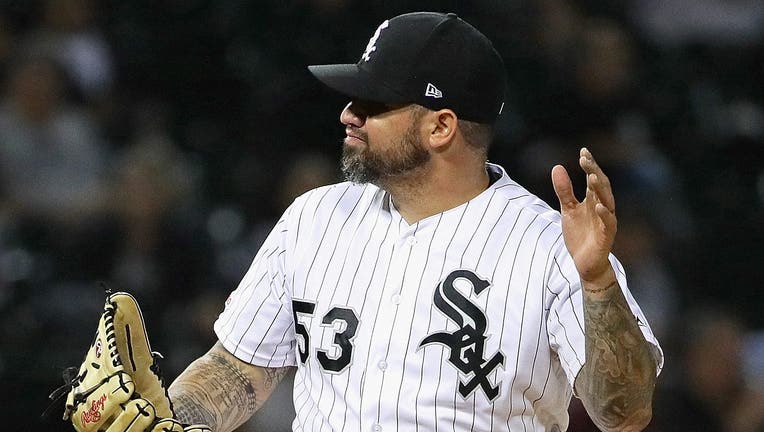 Hector Santiago reacts after giving up a three run home run to Oscar Mercado of the Cleveland Indians in the 5th inning at Guaranteed Rate Field on September 24, 2019 in Chicago, Illinois. (Jonathan Daniel/Getty Images)

CHICAGO - Jose Ramirez put on quite a show in his return to the lineup.

The Cleveland Indians enjoyed every moment.

Ramirez hit a grand slam and a three-run homer in his first two plate appearances after missing a month with a broken hand, and Cleveland pounded the Chicago White Sox 11-0 on Tuesday night.

Roberto Perez and Oscar Mercado also went deep for the Indians, who won for the sixth time in seven games to remain a half-game back of Tampa Bay for the second AL wild card. Cleveland also trails Oakland by one game for the top spot in the wild-card standings.

The switch-hitting Ramirez homered from both sides for the fourth time. He finished with a career-best seven RBIs.

But the compact slugger downplayed his performance as just getting back to work with his teammates, even though he said through a translator that this bat handle had been modified slightly to accommodate this surgically repaired right hand.

"I'm not surprised to be honest," Ramirez said. "You just try to compete and try to get my best pitch and have a best swing, and that's what happened.

"It was great to be back with the guys and help them in any way I can."

The 27-year-old Ramirez was activated from the 10-day injured list prior to the game. He got hurt Aug. 24 against Kansas City and had surgery two days later.

Ramirez said he's "not 100 percent yet," but manager Terry Francona was impressed by his immediate contribution.

"Seven RBIs in his first two at-bats when he has had surgery and hasn't played in a month?  That's unbelievable," Francona said.

Mike Clevinger (13-3) pitched seven innings of five-hit ball and struck out 10 while extending his scoreless streak to 18 innings.

"The past five to eight starts, I've almost been trying to treat it like a playoff start even if it doesn't have the atmosphere," Clevinger said.

Batting left-handed, Ramirez drove a 3-1 pitch from Carson Fulmer (1-2) into the right-field stands with two outs in the first inning. It was his second career grand slam.

Ramirez connected again in the third, this time from the right side against Hector Santiago. His 22nd homer went deep into the left-field stands.

But Ramirez did the real damage.

"He's a special player who took advantage of a couple at-bats there that hurt us," Renteria said.

Santiago replaced Fulmer after the first and yielded seven runs over four innings.

After Ramirez's slam in the first, Perez made it 5-0 with his 24th homer in the second.

Following Ramirez's shot in the third, Mercado hit a three-run drive to left-center in the fifth.

Ramirez finished 2 for 3. He struck out swinging in the fourth inning, and then was replaced at third by Yu Chang in bottom of the fifth.

Indians: Second baseman Jason Kipnis underwent season-ending surgery on Tuesday in New York, also for a fractured bone in his right hand. He has been out since Sept. 15