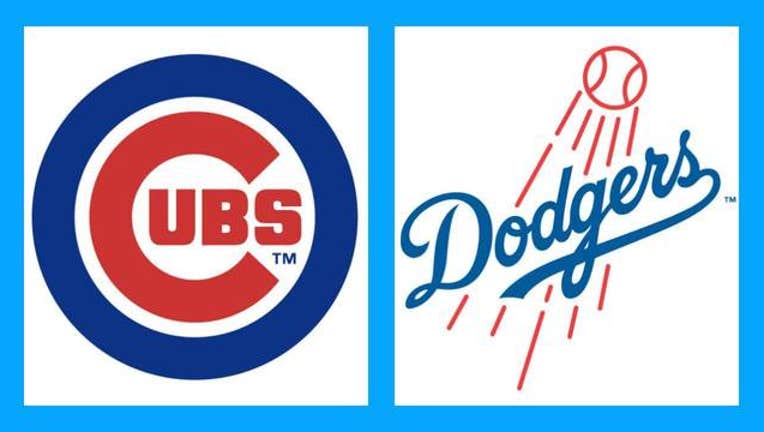 LOS ANGELES (AP) - The Los Angeles Dodgers are tanned, rested and ready. They won 104 games this season and swept their first playoff matchup, giving them four days off in the Southern California sun before the NL Championship Series.

The Chicago Cubs had to grind out a 277-minute victory in Washington to clinch their division series, and they sat on their ensuing charter flight to the West Coast for about 10 hours after a passenger's medical problem forced a long stop in Albuquerque. After arriving around lunchtime Friday, they had to skip a scheduled workout to catch up on sleep and rest.

Whether the dominant Dodgers can use those advantages in any meaningful way against the possibly bedraggled World Series champions will be revealed when these powerhouse clubs play for the NL pennant again.

In Game 1 on Saturday night, Clayton Kershaw will pitch with a full week of rest. The Cubs hadn't figured out who would oppose him by late Friday afternoon.

The Cubs and Dodgers are back for a rematch of last season's NLCS, which Chicago won in six games after Los Angeles took a 2-1 lead. The Dodgers won 18 more games than the Cubs this season, and they have plenty in their favor this October after four straight failures to reach the World Series with high-priced NL West championship teams.

The Dodgers also have far more pressure than the Cubs, and they realize it. As the whole world knows, Chicago ended its 108-year championship drought last fall. The Cubs are in their third straight NLCS, their reputation as lovable losers thoroughly buried.

The Dodgers' World Series drought is a paltry 28 years, but it looms large in LA.

"We had the best record in baseball during the regular season, which doesn't mean anything now," infielder Kike Hernandez said. "We won the division series, which doesn't mean anything in the next series. We got within two games of the World Series last year, and (the Cubs) just manhandled us the next three games. It hurt. If we did get better, that means we should get to the World Series and win it. If we don't do that, not a single person here is going to be happy."

Kershaw gave up four homers in the NLDS opener, but his teammates made them irrelevant with a huge offensive game. With three Cy Young Awards and an NL MVP trophy, Kershaw has just about everything in baseball except reaching the World Series.

With a full week of rest heading into Game 1, the lefty and his Dodgers likely have their best chance yet.

"In years past, it's been Game 5s and a lot of travel and not having home field, so it's definitely a different spot for us," Kershaw said. "It was kind of fun (Thursday) watching them duke it out while we were sitting around. It was great. At the end of the day, it doesn't really matter. The Cubs are here now, and I know they had some travel stuff that was rough, but I have a feeling they're going to be ready to go."

Here are more things to think about this weekend at Dodger Stadium:

LESSONS FROM LAST YEAR: The Dodgers still sting from losing the final three games of last year's NLCS, failing to homer in all three defeats. Compounding their misery, their bus had trouble leaving Wrigley Field while the neighborhood was filled with celebrating fans. When asked what he learned from last year's loss, Kershaw quipped: "Try to walk a few blocks and get an Uber if we lose again." The Dodgers think they're better equipped to counter the Cubs with additions including rookie cleanup hitter Cody Bellinger , a much-improved Yasiel Puig and an extraordinarily deep group of pitchers, including starter Kenta Maeda as a right-handed specialist in the bullpen.

DO IT AGAIN: The Cubs outlasted the Nats despite batting .180 and getting outscored 20-17. That level of production probably won't cut it against the Dodgers, but Maddon senses a resilience in his champions. "(It was) probably a little bit more difficult to get to this point than it was last year," he said. "I talked about the hangover being a real thing. I thought we dealt with it up front. Right now, we're playing with that same kind of mental acumen and edge that I've seen the last two years."

FORECASTING: The Cubs and Dodgers haven't faced each other since late May, when Los Angeles swept a three-game series despite facing Jon Lester, John Lackey and Jake Arrieta. When the Dodgers were near the end of their 82-25 summer surge in August, Maddon said he still liked the way Chicago matches up with the Dodgers in the postseason. "He's getting his wish," Dodgers manager Dave Roberts said Friday.

SEAGER'S BACK: Dodgers shortstop Corey Seager skipped the club's workout because his "back has been barking," Roberts said. Last season's NL Rookie of the Year went 3 for 11 with four walks and two RBIs in the division series after batting .295 in the regular season. Roberts is "very optimistic" Seager will play in Game 1, but Chris Taylor or Hernandez could replace him.

START ME UP: Roberts announced two decisions on starting pitchers before he knew the Dodgers' opponent: Kershaw is on the mound for the opener, and All-Star left-hander Alex Wood will pitch Game 4. Roberts revealed Friday that Rich Hill will pitch Game 2, and Yu Darvish will start Game 3 in Chicago. Wood didn't pitch in the NLDS thanks to the Dodgers' sweep, which means the 16-game winner will hit the mound in Chicago on 21 days' rest.