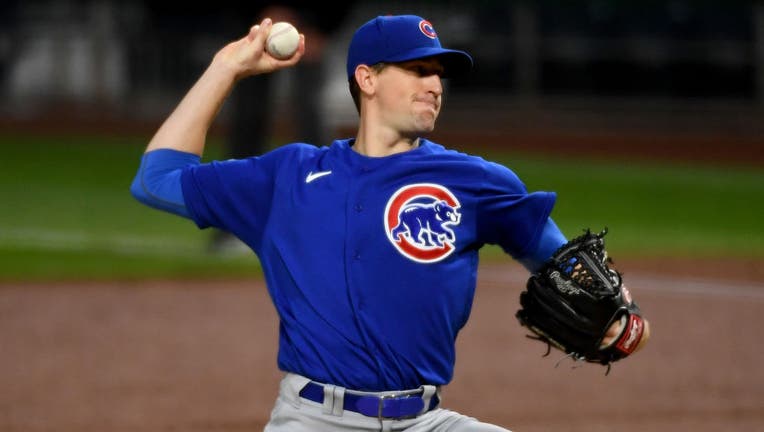 PITTSBURGH, PA - SEPTEMBER 23: Kyle Hendricks #28 of the Chicago Cubs delivers a pitch in the first inning during the game against the Pittsburgh Pirates at PNC Park on September 23, 2020 in Pittsburgh, Pennsylvania. (Photo by Justin Berl/Getty Image

He sees no reason to make a change this year.

Ross announced Tuesday that Hendricks will get the ball when the Cubs begin the season against Pittsburgh on April 1 at Wrigley Field. The right-hander tossed a three-hitter in a 3-0 victory over Milwaukee on opening day last summer.

"I feel like we’ve got a lot of talent," Ross said. "I feel like Kyle, his resume, his leadership, his poise, all that goes into being the opening-day starter, just the extra, kind of, pomp and circumstance that goes with opening day, especially this coming year as well, every arrow points to Kyle."

Ross said he wasn’t ready to announce the order for the rest of his starting pitchers. Chicago also has Jake Arrieta and Zach Davies, and Trevor Williams, Alec Mills, Adbert Alzolay and Shelby Miller are in the mix for the last two spots.

But there is no question about the leader of the rotation, especially after the Cubs traded Yu Darvish to San Diego in December.

The 31-year-old Hendricks, known for his precision, control and professor-like demeanor, is making his second opening-day start. He went 6-5 with a 2.88 ERA in 12 starts during the pandemic-shortened season, helping Chicago win the NL Central.

"I just try and be the same guy I’ve always been," Hendricks said. "I want the guys to be able to trust what they’re going to get out of me."

The opener against the Pirates will be the first game at Wrigley with a crowd since Sept. 22, 2019. The Cubs have been cleared for as many as 8,274 fans per game at the start of the season.

"To be able to have them and that energy they bring every single day, it’s going to be so much fun," Hendricks said.

Hendricks, an eighth-round pick in the 2011 amateur draft, was acquired by Chicago in the July 2012 trade that sent Ryan Dempster to Texas.

"Being that guy that’s consistently taking the ball on the fifth day, going deep into a ballgame and giving my team a chance to win. At the end of the day, that’s the guy I’m always trying to be," he said.