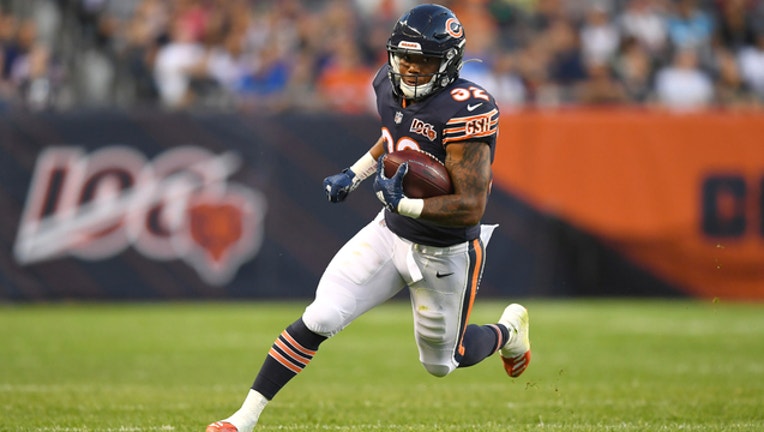 Slye made field goals of 42, 55 and 29 yards and the Panthers had a 7-yard touchdown catch and 11-yard TD run from rookie Elijah Holyfield in a 23-13 victory over the Bears.

The Panthers already have a standout kicker in Graham Gano, and it's possible Slye put himself on the radar of the Bears as well as other teams seeking a kicker by hitting a second-quarter kick of 55 yards for a 6-0 lead. The former Virginia Tech player made a 29-yarder in the third quarter to expand Carolina's lead to 16-10. Slye's 42-yarder came on Carolina's second possession to open the scoring.

While the Bears look for a kicker, the Panthers are trying to determine who will back up quarterback Cam Newton.

Both Carolina quarterbacks Kyle Allen and Will Grier enjoyed solid efforts, with Newton sitting out to rest his shoulder after offseason surgery.

Allen started and completed 7 of 11 for 76 yards, while Grier completed 9 of 16 for 77 yards with a touchdown and an interception. Grier's 7-yard TD pass to Holyfield put the Panthers ahead 13-10 in the third quarter, and was set up by a 57-yard punt return from Terry Godwin. Holyfield added his 11-yard run, cutting to the left sideline in the final two minutes.

The Panthers' defense kept the Bears in check much of the game, with Marquis Haynes and Brian Burns each getting two sacks.

Bears rookie running back David Montgomery made his debut and broke off left tackle for a 7-yard TD in the second quarter, and Fry's point-after kick put the Bears up 7-6. Montgomery finished with 16 yards on three rushes and caught three passes for 30 yards.

Fry later had the Soldier Field fans roaring with a 43-yard field goal to close the first half, the same distance and at the same upright Cody Parkey missed from on his double-doink to end the Bears' 16-15 playoff loss last season to the Philadelphia Eagles.

Pineiro wasn't as fortunate, missing wide left on a 48-yard attempt in the first half before making a 23-yard chip shot to get the Bears within 16-13 in the fourth quarter.

Chicago quarterback Chase Daniel completed 11 of 13 for 120 yards and a TD while Tyler Bray was 8 for 17 for 85 yards for the Bears. Rookie tight end Ian Bunting led the Bears with 77 yards on three receptions.

Holyfield, the son of former heavyweight boxing champion Evander Holyfield, picked himself up and kept on going in the fashion of his famous father.

Elijah Holyfield lost a fumble on his first NFL preseason carry. The former Georgia back was hit by Josh Woods, coughed it up as he went to the ground and James Vaughters recovered to set the Bears up for their drive to the go-ahead touchdown in the second quarter.

Holyfield came back in the second half and caught a 7-yard TD pass in the third quarter to put the Panthers ahead for good, 13-10. Holyfield had an 11-yard TD run with the Panthers trying to drain the clock late in the fourth quarter. He finished with 26 yards on nine rushes and caught two passes for 13 yards.