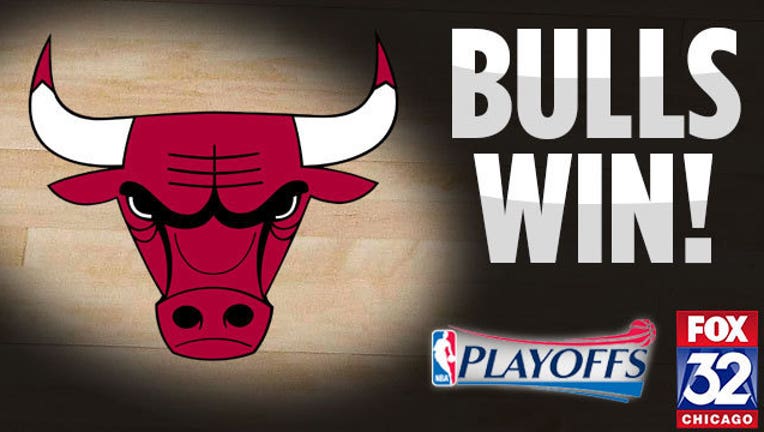 CLEVELAND (AP) - The Chicago Bulls came in oozing with confidence, unafraid of LeBron James and convinced they could keep their playoff momentum rolling.

Derrick Rose made sure they did.

Looking like the league MVP he was before being slowed by knee injuries, Rose scored 25 points, Pau Gasol added 21 and the Bulls led from the start in a 99-92 victory over the short-handed Cleveland Cavaliers in Game 1 of the Eastern Conference semifinals on Monday night.

Rose, who sustained a shoulder stinger in the closing minute, helped the Bulls swipe home-court advantage from the Cavs. Cleveland was missing starters Kevin Love and J.R. Smith, but its bigger issue was not stopping Rose or his pick-and-roll plays with Gasol.

After all he's been through - surgeries, hours of rehab, uncertainty about his future - Rose, who has missed over 180 games the past four seasons, is savoring every moment back in the postseason.

"I just appreciate everything," he said, "getting back on the floor, my fans, every aspect of basketball. It's allowed me to change my life and my family's life. I owe so much to this sport. I'm just trying to roll with it."

Jimmy Butler added 20 points and banked in a contested jumper with 30 seconds left as the Bulls closed it out, silencing a roaring Cleveland crowd already worried about Game 2 on Wednesday night.

Kyrie Irving scored 30 points and James added 19 and 15 rebounds for Cleveland, playing its first game since Love - one of the Cavs' Big 3 - was lost for the remainder of the postseason with a shoulder injury.

"We all just have to play better," said James, who had nine assists but six turnovers. "I wasn't that good tonight."

The Cavs only trailed by four points in the final minutes, but they forced several 3-point attempts and James had two costly turnovers and missed a tough layup in the final 3 minutes.

Finally fully healed after dealing with injuries all season, the Bulls are peaking at the perfect time. Coming off a 54-point win over Milwaukee to wrap up its opening-round series, Chicago jumped to an early lead, withstood a Cleveland comeback and buckled down on defense in the closing minutes to hand Cleveland just its second loss in 24 home games.

Rose ran the show the way he used to, and Gasol, the steady 34-year-old Spaniard, made the Cavs pay for leaving him open by knocking down one mid-range jumper after another.

Rose banged shoulders with Cleveland's Tristan Thompson and felt his arm go numb. He said the feeling came back a few minutes later, and he's not concerned about it lingering.

The Cavs struggled from the start to find any offensive rhythm. Without Love to space the floor, Chicago had an easier time defending James. And without Smith, suspended two games for striking Boston's Jae Crowder in the face, the Cavs didn't have one of their best perimeter shooters.

Iman Shumpert started for Smith and made four 3-pointers and scored 22, but Blatt spent the night unsuccessfully searching for the right combinations.

The Bulls have a healthy Rose, and that might be enough.

"Derrick was making the right plays every time," Butler said.

After the Cavs battled back from a 16-point deficit to tie it 51-all, the Bulls went on a 15-0 run highlighted by Rose's jumper that was a snapshot of him as league MVP in 2011.

With James guarding him, Rose created some space with a dribble and hit a step-back, off-balance 3 to give Chicago a 61-53 lead. The Bulls weren't done as Butler scored on a dunk, Gasol converted a three-point play and then knocked down another short jumper.

It was a nice start for the Bulls, but as Chicago coach Tom Thibodeau was quick to point out, only that.

"You can't get wrapped up in it," he said. "We're going to have to play a lot better in the next game."

James was forced to do a lot on defense as Blatt switched him on Rose, Gasol, Joakim Noah and others.

"I think I guarded every guy they brought into the game," he said.

NOAH, NO POINTS: Noah didn't score in 29 minutes, but he had nine rebounds and drew boos from Cleveland's crowd every time he touched the ball.

Bulls: Instead of sitting on the bench, Rose rode a stationary bike in the hallway leading to Chicago's locker room to stay loose when he wasn't in the game. ... Thibodeau and James have crossed paths many times in the postseason, first when he was an assistant with Boston and now in Chicago. "It seems like we've been around each other in playoff games a lot," Thibodeau said. "I have great respect for him."