Russell Wilson still wants to play for the Seattle Seahawks, his agent said Thursday amid a new report detailing a potential growing fracture between the two sides.

Wilson’s agent Mark Rodgers told ESPN if there was a trade coming down the line Wilson would only want to play for a handful of teams.

Rodgers told ESPN that Wilson’s trade list would include the Dallas Cowboys, New Orleans Saints, Las Vegas Raiders and Chicago Bears. Wilson also has a no-trade clause in his contract and an out after the 2021 season.

The New York Jets or Miami Dolphins do not appear to be on the list despite being mentioned in the most recent report from The Athletic detailing the rift.

The outlet reported that Wilson met with coaches after Seattle’s losses to the Buffalo Bills and Los Angeles Rams to try and figure out how to get the ship righted. Wilson, who was on his way to an MVP award in the first half of the season, started to turn the ball over more and more. At one point between Weeks 6 and 9, Wilson had seven interceptions and was 1-3 in that stretch.

While it didn’t cost the Seahawks too much in the long run, Wilson reportedly had ideas on how to get things turned around. The Athletic reported that Coach Pete Carroll wanted to be "more careful" with the offense and Wilson wanted to "trust himself."

Before Week 10’s narrow win against the Arizona Cardinals, The Athletic reported Wilson expressed his ideas about how to turn around the offense but was ignored. He then "stormed out of the room."

Wilson appeared on "The Dan Patrick Show" earlier this month and said that he hopes to have a more "involved" role going forward, confirming that Seattle has "definitely" gotten calls from other teams seeing if he’s available for trade.

"I want to be involved. At the end of the day, it's your legacy, your team's legacy. ... It helps to be involved more. That dialogue should happen more often."

Wilson, a seven-time Pro Bowler, had a career-best 68.8 completion percentage, to go along with 4,212 passing yards, 40 touchdowns and 13 interceptions for the Seahawks, which finished with a 12-4 record and a first-place finish in the NFC West.

The Seahawks, however, suffered a 30-20 loss to the Rams in the first round of the NFC playoffs, which put an end to their season.

Wilson has been sacked at least 40 times in each of his last eight seasons. 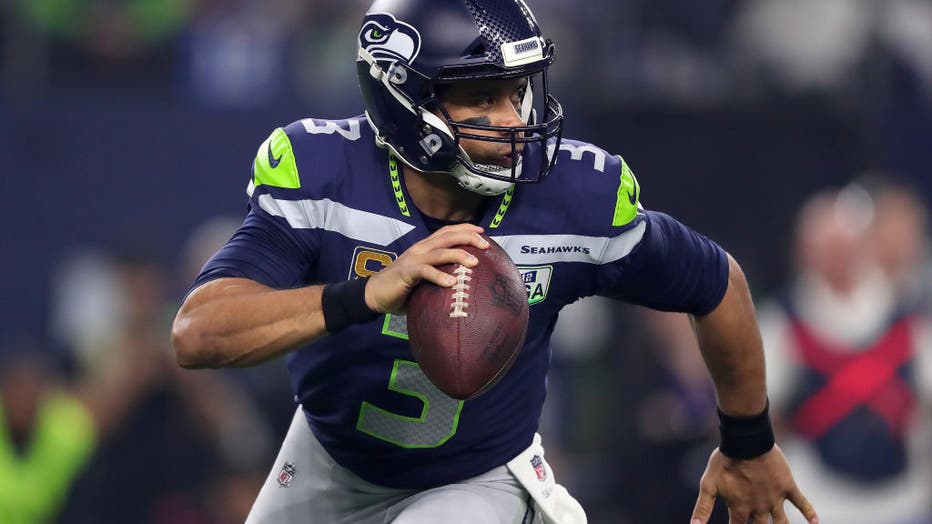 Russell Wilson #3 of the Seattle Seahawks scrambles in the pocket against the Dallas Cowboys in the first half during the Wild Card Round at AT&T Stadium on January 05, 2019 in Arlington, Texas. (Photo by Tom Pennington/Getty Images)