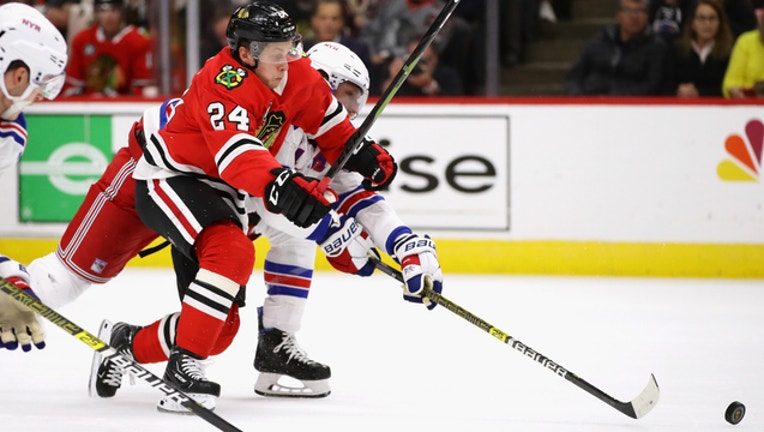 Patrick Kane and Jonathan Toews also scored as Chicago won for the third time in four games, continuing its surprising start. Alex DeBrincat had a goal and an assist, and Corey Crawford made 18 saves in his fourth game after suffering a concussion last year.

New York lost for the third time in four games. Pavel Buchnevich scored in the opener of a four-game trip, and Henrik Lundqvist made 33 stops.

The game was tied at 1 when Schmaltz circled around the offensive zone before taking the puck to the net and threading a pass through the goalmouth to Fortin for a tap-in 10:33 into the period. It was Schmaltz's sixth assist of the season, tied for the team lead, and Fortin's second goal.

The Blackhawks put it away when Kane knocked one off the post before slamming it home for his team-best ninth goal 15:39 into the third. DeBrincat added an empty-netter with 1:09 left.

Toews went in all alone on Lundqvist after New York defensemen Brady Skjei and Adam McQuaid got tangled up near the blue line and fell down. The captain then slipped a shot under Lundqvist's legs for his sixth of the season 2:55 into the game.

Buchnevich responded for the Rangers, tying it with a hard wrist shot on a rebound at 4:09. It was Buchnevich's third of the year.

NOTES: Rangers F Matt Beleskey was assigned to Hartford of the American Hockey League after clearing waivers. Beleskey has appeared in just one game with New York since he was acquired in the February trade that sent Rick Nash to Boston. ... Scott Foster is going to help the Blackhawks at some optional morning skates after his memorable appearance as an emergency goaltender last season. The 36-year-old Foster, an accountant who played college hockey for Western Michigan, was pressed into action March 29 against Winnipeg and stopped all seven shots he faced over the final 14 minutes of the Blackhawks' 6-2 victory. ... D Brent Seabrook played in his 1,014th regular-season game with the Blackhawks, snapping a tie with Eric Nesterenko for third on the franchise list. Hall of Fame forwards Stan Mikita (1,394) and Bobby Hull (1,036) hold the top two spots.