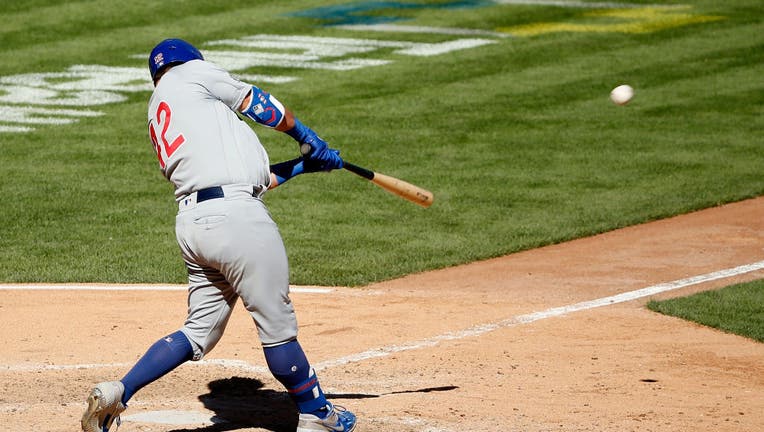 CINCINNATI, OH - AUGUST 30: Kyle Schwarber #42 of the Chicago Cubs hits a grand slam during the ninth inning of the game against the Cincinnati Reds at Great American Ball Park on August 30, 2020 in Cincinnati, Ohio. All players are wearing #42 in ho

CINCINNATI - With one massive drive in the ninth inning, Kyle Schwarber made history for the Chicago Cubs.

Schwarber, Jason Heyward and Ian Happ became the first starting outfield to hit multiple homers in the same game, and the Cubs pounded the Cincinnati Reds 10-1 on Sunday for a split of their four-game series.

Schwarber hit the first and the last of the Cubs’ season-high six homers, belting a solo drive in the fourth against Luis Castillo (0-5) and a grand slam off José De León in the ninth. Heyward connected for solo drives in the fourth and sixth, and Happ hit a two-run shot in the fifth and a solo homer in the seventh.

“I guess we made some history today,” Schwarber said. “When you have a little piece of history, you always keep that with you.”

The NL Central-leading Cubs hit 14 homers in the series. Help is on the way, too, after they acquired acquired José Martínez in a trade before the win. Chicago sent two players to be named or cash considerations to Tampa Bay for Martínez, giving manager David Ross another option at designated hitter.

“All in all, we had good offense throughout the lineup,” Ross said. “Guys battled and got their pitches.”

Joey Votto homered in the sixth for Cincinnati, which rallied for a doubleheader split against Chicago on Saturday. Castillo allowed four runs and five hits in five innings.

Chatwood was making his second start since returning from the IL on Aug. 25. He had been sidelined with a lower back strain.

Castillo, a National League All-Star last season while going 14-8, had allowed one homer all season before surrendering three against the Cubs. He struck out seven and walked one.

“It was two pitches I didn’t locate well,” Castillo said about Chicago’s two fourth-inning homers. ” I think last year we threw a lot of the changeups and the batters saw a lot of it. That is why I’m working so hard on the slider.”

The Cubs also displayed flashy defense with three diving catches, including second baseman Nico Hoerner’s grab of Nick Castellanos’ low liner with the bases loaded to end the seventh. Happ and Heyward each made a diving catch in the outfield.

For the third straight day, both teams wore their No. 42 jerseys they originally wore on Friday to help celebrate Jackie Robinson Day. It also was a nod to MLB paying tribute on Sunday to the 100th anniversary of the launch of the Negro Leagues. Cutouts of Negro League players were perched in seats behind the plate.

Cubs: Chatwood is scheduled to be re-evaluated on Monday.

Reds: LHP Jesse Biddle experienced tightness in his left shoulder during the first game of Saturday’s doubleheader, leading to the diagnosis of an impingement. He was placed on the 10-day injured list. The Reds don’t expect him to need more than the 10 days he’ll spend on the IL, manager David Bell said Sunday.

Cubs: LHP Jon Lester (2-1), Tuesday’s starter in Pittsburgh, allowed one run in six innings in his last start against the Pirates, a 2-1, 11-inning Cubs win on Aug. 2.