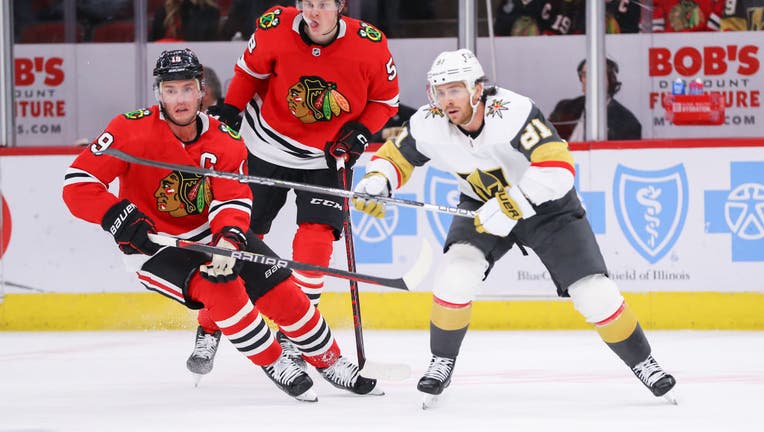 CHICAGO - Reilly Smith scored twice and rookie Logan Thompson made 23 saves to lead the Vegas Golden Knights to a 4-1 victory over the Chicago Blackhawks on Thursday night.

Smith got a short-handed goal in the second period while the last-place Blackhawks were using five forwards on their top power-play unit. He capped the scoring with an empty-netter for his 14th goal.

Chandler Stephenson scored a power-play goal in the second for Vegas, and Phil Kessel tipped one home in the third. William Karlsson had two assists as the Pacific Division leaders won for the third time in four games.

The 25-year-old Thompson lost a bid for this third shutout this season and second against Chicago when Taylor Raddysh scored with 3:54 left in the third. Thompson made 27 saves when he blanked the Blackhawks 1-0 on Oct. 13 in Las Vegas.

The Blackhawks have scored a total of five goals during a five-game slide. Chicago is 1-12-1 in its last 14.

Stephenson stopped a 16-game drought with his first goal since Nov. 10 at Buffalo and No. 7 overall on the season. He had 12 assists during the drought, including four at Winnipeg on Tuesday, and leads Vegas with 22.

Stephenson opened the scoring with 5:19 left in the first. He fired into an empty net off Mark Stone’s feed across the crease.

Smith fired in a one-timer from the right circle for his 13th goal at 3:56 of the second. Karlsson threaded a cross-ice feed to him after spinning away from Chicago captain Jonathan Toews.

Toews and Patrick Kane skated in their 998th game together with Chicago. They are on track to become the 12th pair of NHL teammates and second Blackhawks duo to play in 1,000 regular-season games together on Sunday against the Rangers.

Kane and Toews are in the final seasons of eight-year, $84 million contracts with no movement clauses.

Jack Eichel, who leads Vegas in points, missed his third straight game with a lower- body injury. He went on IR on Monday, but is listed as day to day. ... Golden Knights D Shea Theodore (knee) missed his third game. ... Blackhawks F Andreas Athanasiou returned after missing a game because of a funeral and took Reese Johnson’s place in the lineup. Chicago D Ian Mitchell and F Boris Katchouk also were scratches.

Blackhawks: At Minnesota on Friday.