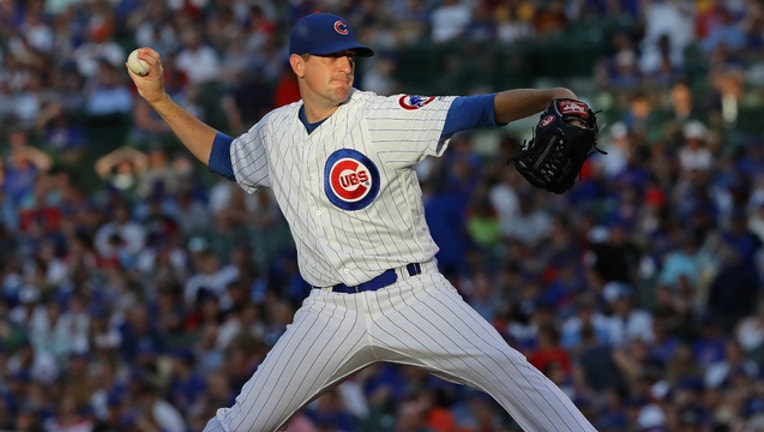 Eugenio Suárez and Yasiel Puig each hit his 22nd home run of the season, and Cincinnati rallied past Chicago 6-3 on Monday night.

Jesse Winker raced home with an unearned run to cap a two-run seventh inning that made a winner of All-Star starter Luis Castillo. And although the NL Central standings are tight, the Reds improved to a surprising 7-3 against the first-place Cubs this season.

"We match up well against them," catcher Curt Casali said. "Our team has really risen to the challenge of facing a playoff-caliber team."

After the game, the Cubs acquired catcher Martín Maldonado in a trade with Kansas City that sent left-hander Mike Montgomery to the Royals. In related news, Chicago also announced that All-Star backstop Willson Contreras is going on the 10-day injured list with a strain to the arch area of his right foot.

Casali sent the first pitch from reliever Steve Cishek (2-5) in the seventh into the left field bleachers to tie it at 3. Winker pinch-hit for Castillo and singled, then the Reds jumped on errors by two usually sure-handed Cubs infielders to take the lead.

"We just kind of fell apart uncharacteristically," Cubs manager Joe Maddon said. "I have no answer.

"It was closer than it looked and we made mistakes to compound the issue."

Castillo (9-3) allowed three runs on seven hits and struck out 10 through six innings. After throwing 105 pitches, the right-hander left trailing 3-2 before his teammates rallied to get him a win.

"He was really good early," Reds manager David Bell said. "You have to give the Cubs credit. I thought they had a really good approach off him and made it a little tough on him.

"Sure enough, he battled and did what you've seen him do on several occasions this year."

Raisel Iglesias got five outs for his 17th save.

Kyle Schwarber hit his 20th home run and doubled. Jason Heyward came through with two more singles and an RBI, but the Cubs fell flat after a three-game sweep of Pittsburgh.

Kyle Hendricks was sharp through six innings in his third start following a 17-day stint on the injured list with shoulder inflammation. The right-hander allowed two runs and four hits.

"I feel really close to where I was and have just got to build on this," Hendricks said.

Suárez hit a full-count pitch into the basket in left-center to put the Reds ahead 1-0 in the first.

Hendricks' defense helped him escape a two-out, bases-loaded jam in the third. Bote blocked Puig's smash down the line, recovered and then threw wide. First baseman Anthony Rizzo stretched, snared the ball and kept his foot on the bag just long enough to record the out.

Schwarber homered to left-center with two outs in the third to tie it at 1 and end Castillo's scoreless streak at 15 1/3 innings.

The Cubs took a 3-1 lead in the fourth. Kris Bryant walked and Rizzo doubled him to third. Bryant scored on Victor Caratini's groundout and Rizzo came home on a wild pitch.

Puig's high fly to left in the sixth was pushed by a steady wind before landing in the basket to cut it to 3-2.

The 32-year-old Maldonado was batting .227 with six homers and 17 RBIs in 74 games for struggling Kansas City. The Cubs will be the fifth major league team for the nine-year veteran, a 2017 Gold Glove winner with the Angels.

Cubs president of baseball operations Theo Epstein said he'll talk to Ben Zobrist soon to get a clearer picture on when the 38-year-old utilityman might return. Zobrist is going through a divorce and has been on the restricted list since May 8.

Epstein expects the 2016 World Series MVP to rejoin the Cubs this season. "Hopefully we can get some kind of plan in place," Epstein said.

Reds: LHP Amir Garrett, on the IL since July 5 (left lat strain), joined the team in Chicago, but Bell said he won't pitch in the series. Garrett threw a side session and will throw live batting practice Wednesday. ... Winker (strained side) didn't start after leaving Sunday's game in Colorado after he hurt himself on a swing in the sixth inning. . Casali has right knee inflammation and is day-to-day, Bell said.

Cubs: Contreras didn't start for a second straight day. Initially, the team said he would play Tuesday, but an MRI revealed more damage. . LHP Cole Hamels (left oblique strain) threw on flat ground again and is expected to progress to a bullpen in the next few days. Hamels has been out since getting injured in a start at Cincinnati on June 28.

Cincinnati RHP Anthony DeSclafani (5-4, 4.26 ERA) takes the mound Tuesday against Chicago RHP Alec Mills, who will make his season debut. DeSclafani is 3-1 in his last six starts and has held opponents to two or fewer runs in five of them. Mills is 6-2 with a 4.73 ERA at Triple-A Iowa. He appeared in seven games for the Cubs last season.