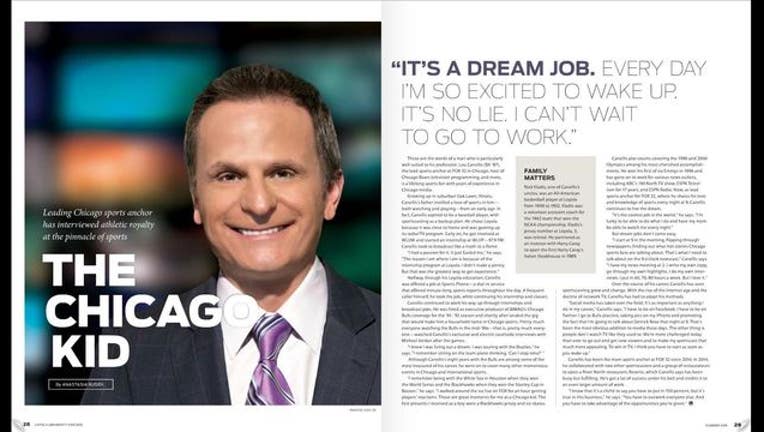 These are the words of a man who is particularly well suited to his profession. Lou Canellis (BA ’87), the lead sports anchor at FOX 32 in Chicago, host of Chicago Bears television programming, and more, is a lifelong sports fan with years of experience in Chicago media.

Growing up in suburban Oak Lawn, Illinois, Canellis’s father instilled a love of sports in him — both watching and playing — from an early age. In fact, Canellis aspired to be a baseball player, with sportscasting as a backup plan. He chose Loyola because it was close to home and was gearing up its radio/TV program. Early on, he got involved at WLUW and started an internship at WLUP—97.9 FM. Canellis took to broadcast like a moth to a flame.

“I had a passion for it. It just fueled me,” he says. “The reason I am where I am is because of the internship program at Loyola. I didn’t make a penny. But that was the greatest way to get experience.”

Halfway through his Loyola education, Canellis was offered a job at Sports Phone—a dial-in service that offered minute-long sports reports throughout the day. A frequent caller himself, he took the job, while continuing his internship and classes.

Canellis continued to work his way up through internships and broadcast jobs. He was hired as executive producer of WMAQ’s Chicago Bulls coverage for the ’91–’92 season and shortly after landed the gig that would make him a household name in Chicago sports. Pretty much everyone watching the Bulls in the mid-’90s — that is, pretty much everyone — watched Canellis’s exclusive and electric courtside interviews with Michael Jordan after the games.

“I knew I was living out a dream. I was touring with the Beatles,” he says. “I remember sitting on the team plane thinking, ‘Can I stop time?’ ”

Although Canellis’s eight years with the Bulls are among some of the most treasured of his career, he went on to cover many other momentous events in Chicago and international sports.

“I remember being with the White Sox in Houston when they won the World Series and the Blackhawks when they won the Stanley Cup in Boston,” he says. “I walked around the ice live on FOX for an hour getting players’ reactions. These are great moments for me as a Chicago kid. The first presents I received as a boy were a Blackhawks jersey and ice skates.

Canellis also counts covering the 1996 and 2000 Olympics among his most cherished accomplishments. He won his first of six Emmys in 1996 and has gone on to work for various news outlets, including ABC’s 190 North TV show, ESPN Television for 17 years, and ESPN Radio. Now, as lead sports anchor for FOX 32, where he shares his love and knowledge of sports every night at 9, Canellis continues to live the dream.

“It’s the coolest job in the world,” he says. “I’m lucky to be able to do what I do and have my mom be able to watch me every night.”

“I start at 9 in the morning, flipping through newspapers, finding out what hot stories Chicago sports fans are talking about. That’s what I need to talk about on the 9 o’clock newscast,” Canellis says.

Over the course of his career, Canellis has seen sportscasting grow and change. With the rise of the Internet age and the decline of network TV, Canellis has had to adapt his methods.

“Social media has taken over the field. It’s as important as anything I do in my career,” Canellis says. “I have to be on Facebook. I have to be on Twitter. I go to Bulls practice, taking pics on my iPhone and promoting the fact that I’m going to talk about Derrick Rose that night at 9. That’s been the most obvious addition to media these days. The other thing is people don’t watch TV like they used to. We’re more challenged today than ever to go out and get new viewers and to make my sportscast that much more appealing. To win in TV, I think you have to start as soon as you wake up.”

Canellis has been the main sports anchor at FOX 32 since 2010. In 2014, he collaborated with two other sportscasters and a group of restaurateurs to open a River North restaurant, Reverie, which Canellis says has been busy but fulfilling. He’s got a lot of success under his belt and credits it to an even larger amount of work.

“I know that it’s cliché to say you have to put in 150 percent, but it’s true in this business,” he says. “You have to outwork everyone else. And you have to take advantage of the opportunities you’re given."