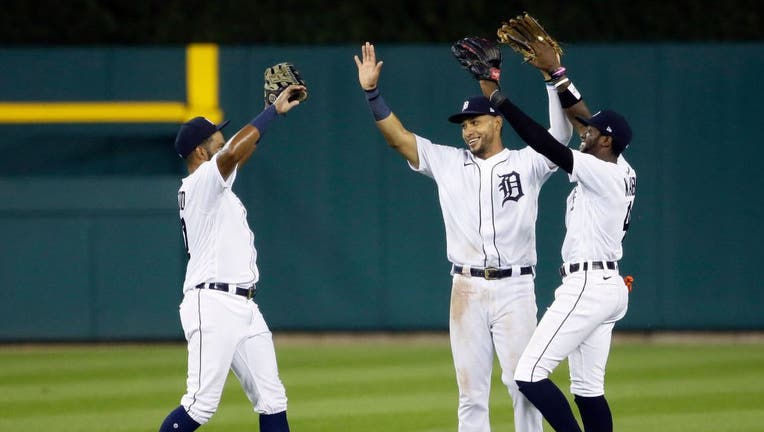 Jorge Bonifacio #57 of the Detroit Tigers celebrates with Victor Reyes #22 and Cameron Maybin #4 after a 7-6 win over the Chicago Cubs at Comerica Park on August 26, 2020, in Detroit, Michigan. (Photo by Duane Burleson/Getty Images)

DETROIT - Throughout the sports world, athletes were taking a determined stand for racial justice, and Jason Heyward wanted to do his part.

That meant the Chicago outfielder wouldn’t be in the lineup when the Cubs took the field against the Detroit Tigers.

The Cubs and Tigers played on Wednesday night — other games across several sports were called off — but Heyward’s absence sent a powerful message. He spoke to manager David Ross before the game and decided not to play. Heyward was scratched shortly before Chicago’s 7-6 loss to the Tigers.

Three major league games were postponed entirely Wednesday as players reacted to the weekend shooting by police of Jacob Blake, a Black man, in Wisconsin. The baseball postponements came after the Milwaukee Bucks refused to take the court for a playoff game against the Orlando Magic. The NBA’s whole schedule Wednesday was called off, along with the three WNBA games and some Major League Soccer contests.

“Sports sometimes is a distraction, and not in a bad way. It’s a good thing,” Heyward said. “But when you have causes that need to be spoken on and need to be acted on, I think it’s huge that sports — to also pay attention and use the platform that we have in the right way.”

Ross said it was important for him to talk to Heyward as everything was unfolding.

“He has been such a leader for us in so many ways, so I just wanted to get him in here and let him speak freely,” Ross said. “It was an emotional conversation. As real as it gets.”

Heyward said he encouraged his teammates to play and wanted to be in the dugout supporting them. As the Cubs took the field between the top and bottom of the seventh, there was a stretch of silence in which the music and piped-in crowd noise were halted, while the words “UNITED FOR CHANGE” appeared on the video board in left field.

“Things have to change in this world, man. Things have to stop,” Detroit infielder Niko Goodrum said. “It’s right and wrong. What’s going on is wrong. If guys choose to sit out and that’s how they want to send their message, then I’m all for it. I didn’t choose to do that, but I do recognize that there are things that have to change.”

The game itself was a wild affair in which Detroit scored five runs in the sixth inning, then nearly blew a four-run lead in the ninth.

The Cubs trailed 7-3 entering the ninth. Nico Hoerner hit an RBI single and Albert Almora added a run-scoring double. An infield single by Ian Happ put the tying run on first with nobody out, then Anthony Rizzo hit a sacrifice fly that center fielder Victor Reyes caught against the wall, some 420 feet from the plate.

The next two hitters went down in order. Detroit pitcher Buck Farmer snagged Kyle Schwarber’s line drive to end it.

Schwarber homered for the Cubs, who led 3-1 before imploding in the sixth. Catcher Willson Contreras failed to catch a foul popup near the screen, and that misplay proved costly when the Tigers scored four runs with two outs.

Joe Jimenez (1-1) allowed Schwarber’s solo homer in the sixth but got the win in relief. Ryan Tepera (0-1) took the loss.

The NL Central-leading Cubs opened the scoring with two runs in the third off Detroit starter Michael Fulmer. Rizzo hit an RBI single, and Javier Báez followed with a sacrifice fly.

Romine made it 2-1 with an RBI single in the fourth, but Schwarber hit a solo homer two innings later.

Jon Lester allowed a run and eight hits in five innings for the Cubs, but he was replaced by Rowan Wick, and the lead quickly vanished. Maybin led off the Detroit sixth with a double, and when Romine hit a foul pop, Contreras had time to get under it but failed to catch it.

If that play had been made, Detroit might not have scored at all in the inning. Instead, Romine hit an RBI double, and after two groundouts, Schoop hit a run-scoring single off Tepera. Cabrera followed with a single, then Jeimer Candelario hit an RBI single and took second on an error by Happ in right.

Goodrum, who had struck out in his first three plate appearances, hit a two-run double to make it 6-3.

Chicago’s sloppy inning wasn’t over yet. Tepera fell down while trying to field a dribbler by Jorge Bonifacio, allowing the Detroit hitter to reach on an infield single.

Cabrera added an RBI single in the seventh.

Jimenez, who leads the Tigers with five saves this season, wasn’t used as a closer Wednesday. He came on in the sixth to face the middle of the Chicago order.

“He’s a little out of whack, a little frustrated, overthrowing the ball,” manager Ron Gardenhire said. “So we decided we’re going to try and get him in, if you possibly can in a major league game, get him in a situation where it’s a little easier on him right now so he’s not trying to overthrow.”

Tigers: OF JaCoby Jones, who left Tuesday’s game with tightness in his right calf, had the night off.

The Cubs have Thursday off before starting a series at Cincinnati on Friday night.

Detroit opens a home series against Minnesota on Thursday night. Matthew Boyd (0-4) starts for the Tigers against Randy Dobnak (5-1).