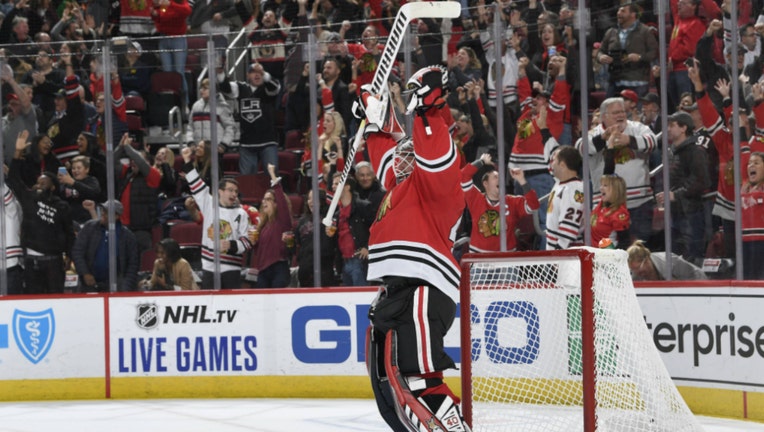 CHICAGO - Jonathan Toews got his first goal of the season when he was in the right place at the right time Friday night.

Big spot for the Chicago Blackhawks, too.

Toews scored 46 seconds into overtime and Robin Lehner made 37 saves, leading Chicago to a 3-2 victory over the Columbus Blue Jackets.

Elvis Merzlikins stopped Patrick Kane's shot from the right circle, but the rebound popped into the air. As Toews drove to the net, the puck deflected in off his left leg to give Chicago (2-2-1) its second straight win.

"It felt better coming off my shin pads," Toews said. "Pretty good feeling, for sure."

Alex DeBrincat tied it at 2 with a power-play goal midway through the third period. Drake Caggiula also scored for Chicago, and Kane finished with two assists.

Pierre-Luc Dubois scored his third goal in four games for the Blue Jackets, and Markus Nutivaara connected early in the third. Columbus (3-3-1) outskated Chicago for much of the night and outshot the Blackhawks 39-33.

"There are a lot of things we know we can do better, but for us to hang in there and find a way to tie things up and give ourselves a chance in overtime," Toews said. "Got to find a way to win those games, can't let them slip, sometimes you get two points."

Lehner's effort - and first win with Chicago - was part of the equation. So was killing all four Columbus power plays.

"It wasn't perfect, but it's also a positive that we found a way to win anyway," Chicago coach Jeremy Colliton said. "I thought the penalty kill was excellent. (Lehner) made some big saves those time they had us under pressure."

Merzlikins blocked 30 shots in his second NHL start. The 25-year-old Latvian was tagged for seven goals on 40 shots by Pittsburgh in his debut on Oct. 5.

"I came to the rink with the mindset I was going to win my first game," Merzlikins said. "The team helped me a lot. Huge blocked shots in front of me. Thank them for that."

The Blackhawks led 1-0 after the first period on Caggiula's first goal of the season, despite being outplayed for much of the frame.

The Blue Jackets dominated early and Lehner came up with several tough saves to keep it scoreless. He stopped Riley Nash and Alexander Wennberg from close range in the opening minutes.

Columbus was outshooting Chicago 12-4 when Caggiula connected with 4:25 left in the period from the top of the left circle. Caggiula faked a pass, then fired a shot that deflected off defenseman Ryan Murray's stick, sailed over Merzlikins' glove and clanked in off the intersection of the crossbar and right post.

The Blackhawks failed to score during a 5-on-3 power play during the final 1:06 of the first.

Dubois tied it 5:33 into the second when he battled past Chicago defenseman Connor Murphy and cut in alone. After drawing Lehner out of the net and down to the ice, Dubois fired into the upper right corner of the net.

Nutivaara put Columbus ahead 2-1 at 2:55 of the third. Lehner got a glove on Nutivaara's first shot from right wing, but couldn't control the rebound. Nutivaara skated to the net and pitched the rebound past Lehner's left shoulder for this second goal.

DeBrincat tied it during a power play at 8:08. He fired in a one-timer from the left circle off Kane's cross-ice feed.

NOTES: After the game, the Blackhawks recalled forward Kirby Dach, the third overall pick in the 2019 draft, from his conditioning assignment with Rockford of the AHL. ... Tennis great Billie Jean King participated in a fire-the-puck contest between the second and third period and scored a goal. ... Columbus F Josh Anderson missed his fifth game with an upper-body injury. ... Merzlikins is the fourth Latvian goalie in NHL history and played the past six seasons for HC Lugano of the Swiss national league. ... Former Blackhawks C Dave Bolland, who played on Chicago's 2010 and 2013 Stanley Cup teams, was honored in a "One More Shift" pregame ceremony. Bolland scored the winning goal in Game 6 of the 2013 Stanley Cup Finals at Boston that gave Chicago the championship.