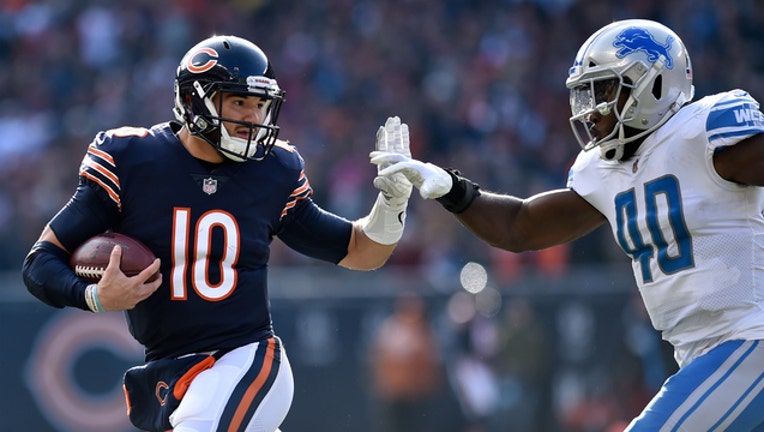 CHICAGO Quarterback Mitchell Trubisky #10 of the Chicago Bears carries the football against Jarrad Davis #40 of the Detroit Lions in the second quarter at Soldier Field on November 11, 2018. (Photo by Quinn Harris/Getty Images)

CHICAGO (AP) - Mitchell Trubisky locked in right from the start, whether he was firing downfield or making the right read underneath the defense.

It added up to one of his best performances as a pro, not to mention a rare win for Chicago against Detroit and an NFC North rival.

Trubisky threw for a career-high 355 yards and three touchdowns, and the first-place Bears beat the Lions 34-22 to snap a 10-game losing streak against division opponents on Sunday.

The Bears (6-3) had dropped nine of 10 against Detroit (3-6) and were seeking their first victory over a division opponent since Oct. 31, 2016, against Minnesota.

Chicago jumped out to a 26-7 halftime lead with Trubisky and Allen Robinson leading the way. And the Bears surpassed their win total from last year with their third straight victory .

"We were just out there having fun today," Trubisky said. "Everyone was doing their job. We just went out there and played. And the plays made themselves because we were just going out there not thinking, just translating the work from practice on gameday."

Though he threw for six touchdowns against Tampa Bay earlier this season, Trubisky had one of his best games since the Bears took him with the No. 2 pick in the 2017 draft.

"He's playing his tail off right now," coach Matt Nagy said. "I love where he's at."

Rookie Anthony Miller added a career-high 122 yards on five receptions, including a 45-yard TD and a 55-yard catch.

Khalil Mack had two of Chicago's six sacks against Matthew Stafford - both in the second half after missing back-to-back games with an injured right ankle.

Bryce Callahan had a sack and an interception.

About the only downer for the Bears was Cody Parkey hitting uprights while missing two extra points and two field goals.

Things were so bad for him that fans cheered sarcastically when he made an extra point late in the first half and let out a loud roar when the Bears went for a 2-point conversion after a touchdown by Robinson in the third.

"Of course (coaches are) frustrated with me but who's more frustrated than myself?" Parkey said. "This is my job, this is what I'm supposed to do and I'm missing out there. So I mean I've just got to trust in what I'm doing."

Parkey's misses didn't stop the Bears from opening a three-game stretch against division opponents on a winning note.

Detroit dropped its third in a row after back-to-back victories.

Stafford was consistently under pressure again after getting sacked 10 times against Minnesota the previous week. He was 25 of 42 for 274 yards, two touchdowns and a pair of interceptions.

"We're fighting, nobody can say we're not fighting until the very end," said running back Kerryon Johnson, who scored from the 1 near the end of the first half.

"Problem is we start off slow and then the fight at the end doesn't matter. We just have to come out, and get better at the beginning. Keep on doing what we're doing at the end and put it all together."

Trubisky had a 158.3 rating at halftime after going 14 of 16 for 209 yards and two touchdowns with the Bears predominantly in a no-huddle offense.

Coming off a 41-9 romp at Buffalo, Chicago scored on its first four possessions to grab a 26-0 lead. Robinson set up Tarik Cohen's 3-yard touchdown on the game's opening drive when he turned a slant into a 35-yard gain, breaking a tackle by DeShawn Shead on a 35-yard slant. Parkey hit the right upright on the extra-point attempt. But the Bears kept rolling from there.

Nagy insisted he still trusts Parkey and the Bears won't look to bring in another kicker.

"There's zero chance of that happening," he said.

Nagy also dismissed the idea of having Parkey practice at Soldier Field during the week, saying "it's pretty windy up at Halas Hall" in suburban Lake Forest, where the team is headquartered.