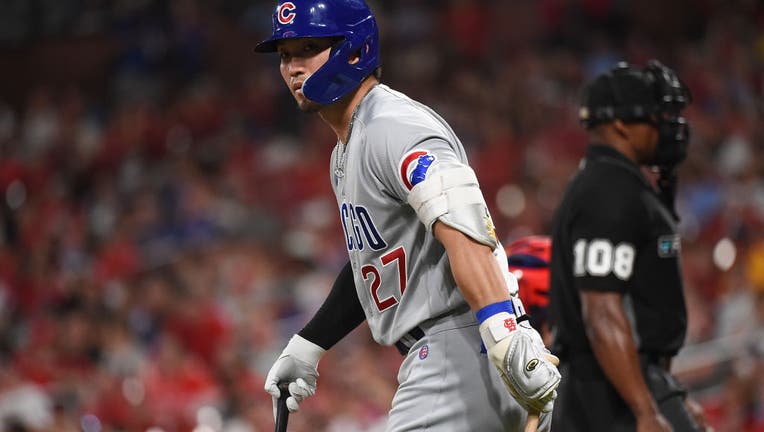 ST LOUIS, MO - AUGUST 02: Seiya Suzuki #27 of the Chicago Cubs looks on while at bat against the St. Louis Cardinals in the eighth inning at Busch Stadium on August 2, 2022 in St Louis, Missouri. (Photo by Joe Puetz/Getty Images)

Molina returned from knee inflammation that had sidelined him since June 16. Paired once again with Wainwright, the two 40-year-olds teamed up to shut down Chicago.

Wainwright (8-8) allowed six hits and struck out four without a walk. Molina flashed his Gold Glove form by throwing out Rafael Ortega attempting to steal second in the first inning.

Wainwright and Molina made their 317th career start as batterymates, passing the Boston/Milwaukee Braves duo of Warren Spahn and Del Crandall for sole possession of second place in major league history since 1901. The only pair in front is Mickey Lolich and Bill Freehan (324) of the Detroit Tigers (1963-75).

Molina last caught Wainwright on June 11 against Cincinnati. Wainwright made eight starts without Molina behind the plate from June 17 to July 27, going 2-4 with a 3.93 ERA.

Goldschmidt drove in two runs in the third with a single.

A three-run fifth put St. Louis up 5-0. Carlson’s homer came after Tommy Edman led off with a walk. With one out, Goldschmidt hit his 25th homer.

Arenado added his 20th home run with two outs in the seventh.

After finishing the first inning, Wainwright reached 2,500 innings for his career. He is the fifth active MLB pitcher and fourth Cardinal all-time to reach that threshold.

COME FLY WITH ME

Cardinals SS Paul DeJong turned 29 and celebrated by returning to the lineup at Busch Stadium. DeJong, an All-Star in 2019, was sent to Triple-A Memphis on May 10. He was recalled Saturday when the Cardinals played in Washington.

Cardinals: INF/OF Juan Yepez (right forearm strain) can hit but can’t throw yet. Yepez went on the injured list July 15, a day after making an 84.5 mph throw from right field to nab Dodgers slugger Freddie Freeman at the plate.

Cubs: LHP Justin Steele (4-7, 3.86 ERA) lasted only 3 2/3 innings last time out in San Francisco. He will be making his third career start against the Cardinals. He took a no-decision in his first start against them this season, tossing seven innings and allowing one earned run.