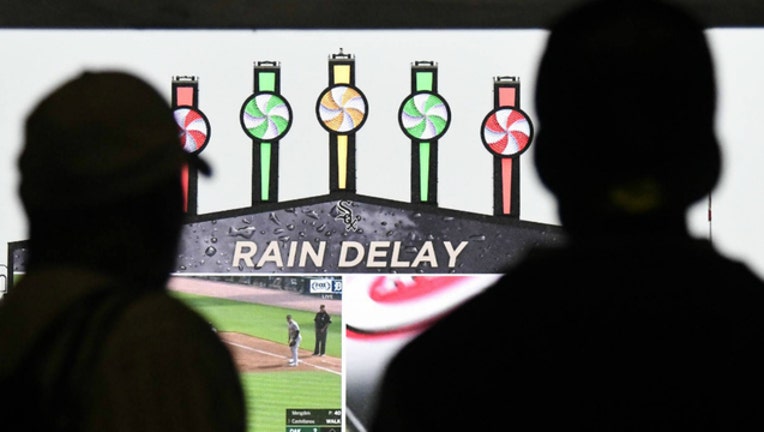 CHICAGO (AP) - Lucas Giolito doesn't regard his victory as a complete game. After a long rain delay, five innings equaled nine - at least in the record book.

Giolito struck out the side in the top of the fifth before play was halted because of rain, Leury Garcia homered and the Chicago White Sox beat the Toronto Blue Jays 4-1 Saturday.

"Everyone was joking about that, 'Shower, complete game!'" Giolito said. "I don't consider it a complete game until I get nine. But I went out there for the fifth and saw the rain coming down. I was like, 'We've got to pick up the tempo a little bit,' and luckily we were able to get through five and close it out."

The game was called after a wait of three hours.

"The raindrops were so big that they were getting into my glove, on the ball, getting on my hand," said Giolito, who improved to 5-1. "So my approach was just to attack the strike zone with a fast pace and hopefully get a nice 1-2-3 inning, and that's what we did."

Yonder Alonso had two singles and two RBIs for the White Sox, who have won five of seven.

Ryan Feierabend (0-1) allowed four runs and seven hits in four innings for Toronto in his first start in the majors since 2008. He struck out two and walked one. The Blue Jays have lost 10 of 13.

"Our offense is swinging the bats a lot better, so I think we still had a chance," Toronto manager Charlie Montoyo said. "Mother Nature says there's no way you can play."

Freddy Galvis doubled down the right field line in the second inning, and a ball boy fell over while moving out of the way of the ball. Brandon Drury followed with a groundout to tie it at 1.

Alonso and Charlie Tilson singled to drive in two runs for a 3-1 lead in the bottom half. Alonso added another RBI single in the third.

The Blue Jays selected Feierabend's contract before the game from Triple-A Buffalo, where went 2-0 with a 2.70 ERA in three starts. He has pitched in Korea since last appearing in the majors in 2014 with the Texas Rangers. He entered with a career record of 2-11 with a 7.15 ERA and no road victories. The knuckleballer also throws a fastball and changeup.

Giolito gave up a run and three hits and was credited with his first career complete game. He struck out four and walked two. Giolito had allowed one earned run in his previous 16 2/3 innings.

"The maturation that he's shown, the ability to continue to repeat that delivery, thank goodness," manager Rick Renteria said.

Rain soaked the field before the game was called.

"MLB waited as long as they could - I appreciate that - to give us a chance, but then it was not playable," Montoyo said. "There was nothing we could do about it."

In his last start, Feierabend pitched against the father of current teammate Vladimir Guerrero Jr. That's just one connection he has with former All-Stars and their offspring. Two others are in the Toronto farm system: the sons of Craig Biggio and Roger Clemens.

"It's kind of crazy," Feierabend said. "I actually had this conversation with the guys in spring training: Not only Guerrero, but I played against Cavan Biggio's dad and (Kacy) Clemens' dad at one point or another."

Blue Jays: RHP Javy Guerra (0-0, 3.86 ERA) was designated for assignment to make room for Feierabend. ... RHP Clay Buchholz (right shoulder inflammation) had an MRI on Saturday that showed a Grade 2 elbow strain. He will follow up with Dr. James Andrews on Monday for a second opinion, according to the team. ... RHP David Phelps, who had Tommy John surgery in March 2018, has thrown two live bullpens with no issue, the team said. He was scheduled to throw another live bullpen Saturday.

White Sox: LHP Carlos Rodon (3-2, 5.19) underwent successful Tommy John surgery on Wednesday. He is expected to return for the second half of next season. ... Renteria hopes OF Eloy Jimenez (right ankle sprain) will be ready to return from the injured list for the team's road trip that begins Monday at Houston.

RHP Trent Thornton (1-4, 4.81 ERA) is expected to start for Toronto in the series finale. Thornton got his first major league victory after allowing two runs in 5 2/3 innings against San Francisco in his last start. RHP Reynaldo Lopez (3-4, 5.58) is scheduled for the White Sox. He has a 3.65 ERA in his last four starts.