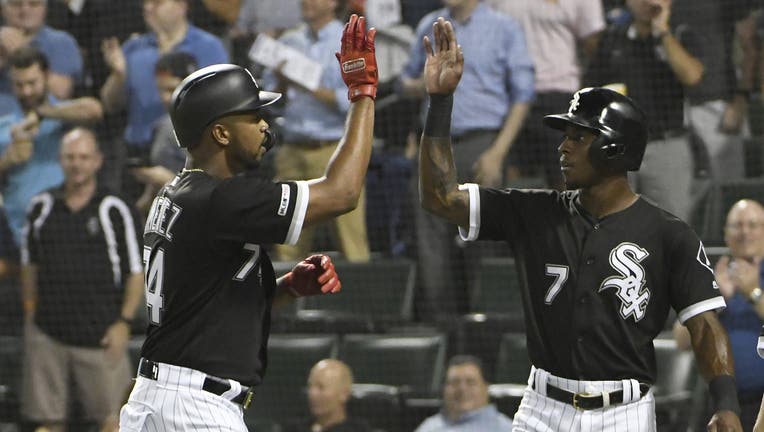 CHICAGO - Tim Anderson got more excited as the names started rolling in.

Yasmani Grandal behind the plate, and Gio González and Dallas Keuchel for the rotation. Edwin Encarnación for Chicago’s lineup, and Steve Cishek for the White Sox bullpen.

“It shows you how serious we are,” Anderson said.

Very serious at this point.

Coming off seven consecutive losing seasons, the White Sox are talking playoffs heading into spring training. After Anderson, Yoán Moncada and Eloy Jiménez broke out last year and Grandal, Keuchel and company signed in free agency, the rebuild is over.

“I’m very confident and I trust the work we have been doing the last couple of years, this year all that effort, all that work is going to pan out,” first baseman José Abreu said through a translator.

While the newcomers filled some big holes, the biggest key to Chicago’s chances might be the continued development of its promising young players.

Lucas Giolito is the ace of the rotation after he went 14-9 with a 3.41 ERA in 29 starts last year, tying for the major league lead with two shutouts and three complete games. Moncada set career highs with 25 homers, 79 RBIs and a .315 batting average in 2019, and Jiménez belted 31 homers in his first big league season.

Anderson led the majors with a .335 batting average, and he thinks he can be even better this year.

The improvement Chicago showed last year helped attract the attention of Keuchel, who agreed to a $55.5 million, three-year contract in December. Keuchel went 8-8 with a 3.75 ERA last season for Atlanta, beating the White Sox on Aug. 31.

Keuchel said the situation on the South Side reminds him of the beginning of his career with Houston.

“Last year I told myself I wasn’t going to go back to a team like that, but here we are,” he said. “I guess I was impressed with the jump (in) talent from 2018 to 2019, and getting to pitch against them when I was with the Braves was a big tell-tale sign. I think that’s what really kind of drove me to say ‘Hey, this team might be a good fit for me.’”

Pitchers and catchers report to Arizona on Feb. 12.

Nomar Mazara takes over in right field after he was acquired in a trade with Texas in December. Mazara, who turns 25 in April, has big-time power, but he was slowed by injuries the past two years.

Luis Robert is so highly regarded he signed a $50 million, six-year contract before his major league debut. The 22-year-old outfielder batted .328 with 32 homers and 92 RBIs in the minors last year.

Grandal and James McCann form what should be one of the top catching tandems in baseball. Grandal hit a career-high 28 homers for Milwaukee last season and is highly regarded for his framing skills. McCann made the All-Star team last year for the first time, and he played a key role in Giolito’s breakout performance.

The possibilities for the back end of the rotation feature a mix of potential and concern. Reynaldo López struggled with inconsistency last season, allowing a major league-high 110 earned runs in 184 innings. Dylan Cease had a 5.79 ERA over his first 14 major league starts. Michael Kopech is coming off Tommy John surgery.

The situation at second base is worth watching. Nick Madrigal, who hit .311 over three minor league stops last year, could earn the starting job with a solid spring. If he falters, the White Sox could go with Leury García or Danny Mendick when they host Kansas City on opening day March 26, and send Madrigal back to Triple-A Charlotte for more seasoning.