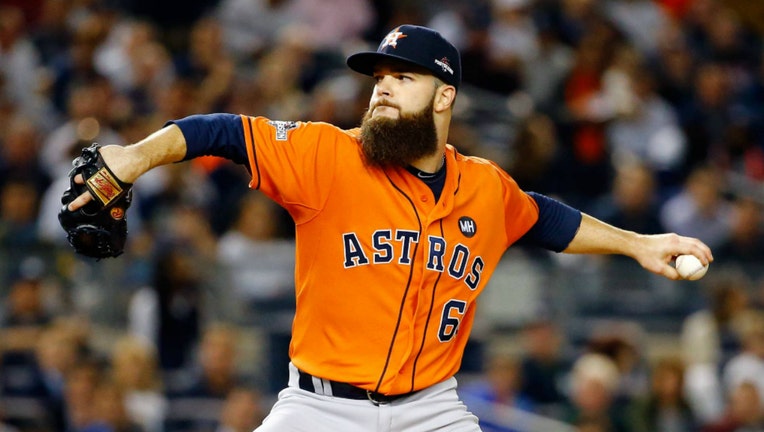 Dallas Keuchel #60 of the Houston Astros throws a pitch in the first inning against the New York Yankees during the American League Wild Card Game at Yankee Stadium on October 6, 2015 in New York City. (Photo by Al Bello/Getty Images)

CHICAGO - Dallas Keuchel has become the first member of the 2017 Houston Astros to offer a public apology for the team's sign-stealing scheme during their run to the World Series championship.

Speaking Friday at the fan convention for the Chicago White Sox, who signed the left-hander to a $55.5 million, three-year contract in December, Keuchel said he felt what happened was blown out of proportion, but he was sorry.

“I'm not going to go into specific detail, but during the course of the playoffs in ‘17, everybody was using multiple signs," Keuchel said, “I mean, for factual purposes, when there’s nobody on base, when in the history of major league baseball has there been multiple signs?

“It's just what the state of baseball was at that point and time," the former AL Cy Young Award winner said. “Was it against the rules? Yes it was, and I personally am sorry for what's come about, the whole situation."

An investigation by Major League Baseball found the Astros used the video feed from a center field camera to see and decode the opposing catcher’s signs. Players banged on a trash can to signal to batters what was coming, believing it would improve the batter's odds of getting a hit.

The process started in 2017, according to baseball's investigation, and continued through the 2018 season. Houston won the franchise's first championship three years ago, beating the Los Angeles Dodgers in Game 7 of the World Series, and made it to the AL Championship Series during Keuchel's final year with the team in 2018.

“To the extent of the whole situation back then, I can tell you that not every game there was signs being stolen," Keuchel said. “Some guys did a really good job, and sometimes we did as a group have signs but we still couldn't hit the pitcher. So it wasn't like every game we had everything going on.

“So at that point that's when the whole system, it really works, a little bit, but at the same time, there was a human element where some guys were better than our hitters."

Astros general manager Jeff Luhnow and manager AJ Hinch were suspended and then fired in the aftermath of MLB's investigation, and the fallout likely will continue into the season. Managers Alex Cora of the Red Sox and Carlos Beltrán of the Mets also lost their jobs over their role in the scheme, and Astros stars Alex Bregman and José Altuve faced heavy criticism for their first public comments after the investigation.

Oakland right-hander Mike Fiers also could be headed for an icy reception in some corners of the sport. MLB began its probe after Fiers, who played for the Astros in 2017, told The Athletic about the team's scheme to steal signs.

Asked about Fiers, Keuchel called it a “tough subject" because of baseball's tight-knit community in the locker room.

“It sucks to the extent of the clubhouse rule was broken and that's where I'll go with that," Keuchel said. “I don't really have much else to say about Mike."

Sign stealing is a legal and time-honored part of baseball as long as it is done with the naked eye. Some players are even known for their sleuthing skills.

But using technology is prohibited - a prickly issue for baseball as technology moves closer and closer to the field. MLB has been examining the feasibility of an electronic strike zone.

“There's conversations all the time about signs," Keuchel said. “If we're going to go into robot umpires or automated strike zones then definitely a mic to the pitcher-catcher should be evolutionized. But if we're not going to do that, then keep it as is. So it's either, hey, let's do one thing or let's do the other and quit talking about it.”