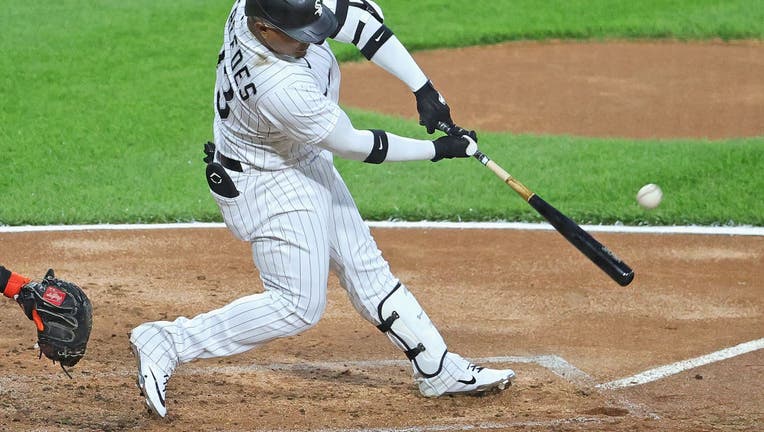 CHICAGO, ILLINOIS - MAY 27: Yermin Mercedes #73 of the Chicago White Sox hits a solo home run in the 2nd inning against the Baltimore Orioles at Guaranteed Rate Field on May 27, 2021 in Chicago, Illinois. (Photo by Jonathan Daniel/Getty Images)

CHICAGO - One day after announcing he was stepping away from baseball, Yermín Mercedes was back with the Chicago White Sox’s Triple-A affiliate.

The White Sox confirmed Thursday the surprising rookie who carried the team with his booming bat early in the season and got sent to the minors following a prolonged slump was in uniform for the Charlotte Knights’ game against the Durham Bulls.

It was a turnaround from his since-deleted post Wednesday night that included an image with the words "it’s over." He wrote in the caption, "I walked away from baseball for a while. God bless you. It’s over."

Hall of Fame manager Tony La Russa vowed following Wednesday’s loss to Minnesota to reach out to Mercedes and insisted the player has a "big league future."

"You’re at Triple-A, you’ve tasted the big leagues, you can get emotional," La Russa said. "But I don’t know more than that."

The 28-year-old Mercedes sparked Chicago’s offense through the opening months of the season, batting .415 with five homers and 16 RBIs in 22 games in April. In May, Mercedes angered La Russa by homering on a 3-0 pitch in the ninth inning of a game the White Sox led 15-4.

Mercedes eventually cooled off, hitting .150 (16 for 107) over his final 31 games with Chicago before being demoted to Charlotte on July 2.