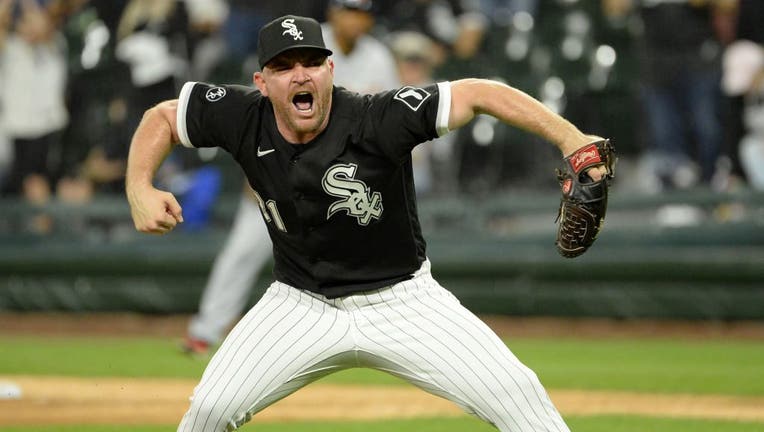 Liam Hendriks of the Chicago White Sox reacts after recording the final out of the game against the Detroit Tigers on Oct. 2 at Guaranteed Rate Field (Photo by Ron Vesely/Getty Images)

CHICAGO - Expect a blackout on the South Side this afternoon when the White Sox host a Change the Game Rally Monday outside Guaranteed Rate Field.

It’s a celebration of the Sox reaching the postseason.

In fact, the Sox have made the playoffs in consecutive seasons for the first time in franchise history.
The team clinched the AL Central title in a Sept. 28 game against the Cleveland Indians.

Monday's focus is the fans.

The rally, which runs from 3 p.m. to 7 p.m. in the Gate 5 plaza, is for the whole family with games, activities, the speed pitch and many other ways to win prizes.

There will also be giveaways, special guest appearances, a DJ as well as food and drink.

"We really wanted to kick it off early. The season ended yesterday. We don’t play our first home game until the 10th. So yeah, we wanted fans to have the opportunity to come down to the ballpark and celebrate," said Gareth Breunlin, Director of Advertising and Design for the White Sox.

"It’s an exciting time. We are ready to get this playoff thing started. So let’s go, "said Brooks Boyer, the ballclub's Senior Vice President of Marketing

The next fix for diehard Sox fans comes Thursday in Houston when the Sox take on the Astros.

Then it’s back to the Rate for games Sunday and Monday.

"We didn’t have fans last year during the postseason," said Boyer. "So fans getting in the ballpark, it’s gonna be a lot of fun. The atmosphere is going to be electric."

"And I think with us having our fans wear all black supporting the team, not only in the ballpark but throughout the city, this is gonna be a very intimidating atmosphere for the Houston Astros."