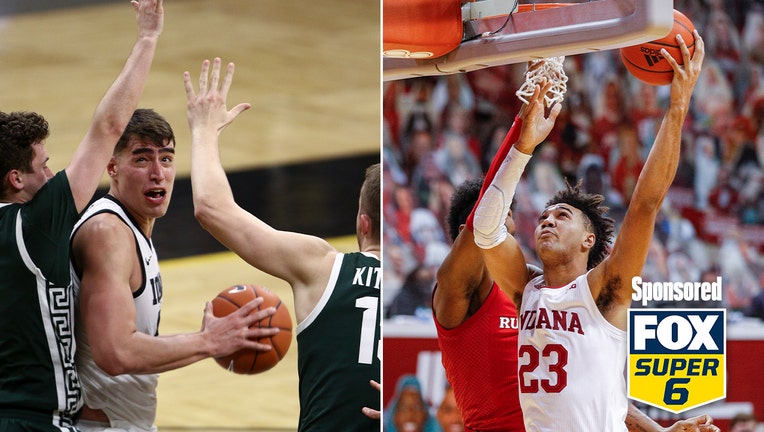 LEFT: Forward Luka Garza #55 of the Iowa Hawkeyes goes to the basket during the second half between guard Foster Loyer #3 and forward Thomas Kithier #15 of the Michigan State Spartans. RIGHT: Trayce Jackson-Davis #23 of the Indiana Hoosiers shoots th (Matthew Holst/Michael Hickey/Getty Images)

In a word, Luka Garza is super.

The contender for college basketball’s player of the year award has put Iowa into the upper echelon of college basketball and near the top of the very crowded Big Ten standings.
However, Garza and the Hawkeyes better spend this Super Sunday searching for revenge against an Indiana team that already dealt a huge surprise back on Jan. 21 in Iowa City.

But the great part of league play is there is always time for another meeting, And that will take place at Assembly Hall in Bloomington on Sunday (12 p.m. ET, FOX) when Garza and the Hawkeyes come to town.

And you could have a Super Sunday of your own with FOX’s Super 6. Just download the Super 6 app on your smart phone or tablet, predict the right answers to the six questions on Sunday’s game  and you could win $1,000. It’s that simple. It’s free. It’s fun.

Which team will score the last point of the first half?
Iowa or Indiana
In the game on Jan 21- won by Indiana by an 81-69 margin at Carver-Hawkeye Arena- saw Iowa hold a 37-31 lead at intermission. However, the Hoosiers started to chip away and scored the final three points of the first half in that one.

Who wins: Iowa or Indiana?
Iowa’s loss to Ohio State on Thursday night adds a sense of urgency for Iowa, who has now lost three out of the four games heading into this game. This is a revenge game for Iowa and they need to make a statement if they want to end up as a Top 3 seed – maybe not as big a deal because of the "all in one place" nature of the NCAA Tournament, but more a point of pride. For Indiana, a win would be huge for the program moving forward.