Ochoa stopped a shot from Polish striker Robert Lewandowski after a controversial penalty.

Mexico is in a tough spot heading into its World Cup match Wednesday against Saudi Arabia (Wednesday at 2 p.m. ET on FS1), after losing to Argentina 2-0 over the weekend.

El Tri currently only have one point, from an opening draw with Poland, putting them at the bottom of Group C.

If Mexico fails to advance it will be the first time since 1978 that the misses the knockout stage.

Mexico cannot advance without beating Saudi Arabia, one of the surprises of the tournament.

Mexico will need help from Argentina or Poland to keep their streak going.

An incredible strike from Luis Chavez puts Mexico up 2-0 and closer to moving through to the next stage.

2:58 p.m.
Mexico beats Saudi Arabia 2-1, but it is not enough to advance. Mexico misses out on the knockout stage for the first time since 1978.

2:50 p.m.
Another goal for Mexico waived off on an offsides call. Mexico needs a goal to advance.

2:49 p.m.
6 minutes of stoppage time in Poland-Argentina. Mexico needs Argentina to score or a goal themselves to advance.

2:37 p.m.
Here's where the fair play tiebreaker stands: Poland has 4 yellow cards, Mexico has 7. That means Poland would advance and Mexico would be out of the tournament.

2:26 p.m.
Argentina takes a 2-0 lead! Mexico and Poland are tied on goals scored. After goal differential and goals scored it goes to fair play

These are the point deductions according to the fair play system:

Indirect red card: -3 (as a result of a second yellow card)

Yellow card and direct red card: -5 (with only one of the deductions applied to a player in a single game)

2:09 p.m.
Argentina takes a 1-0 lead over Poland. That makes it tough for Mexico to move on. Even if Mexico goes on to beat Saudi Arabia. They would not advance on goal differential.

The easiest way for El Tri to move on to the Round of 16 is if they win, and Poland beats Argentina. In that scenario, Mexico would finish second in the group and live on to play at least one more game.

2022 World Cup quiz: Do you recognize countries competing in Qatar by their flags?

If Argentina wins, Mexico can advance if things get a bit crazy.

So Mexico fans, if Argentina is winning you should root for a blowout.

How do you pronounce Qatar? We asked some experts.

If Argentina and Poland Tie

If Poland and Argentina tie, Mexico will need to win by a lot.

A tie would put Mexico and Argentina with the same number of points. Argentina's goal differential is currently +1. Mexico would need to win by at least 3.

If the teams have the same number of points and the same goal differential, the tiebreaker moves to total goals scored. Argentina has scored 2 goals this tournament. Mexico still sits at 0. 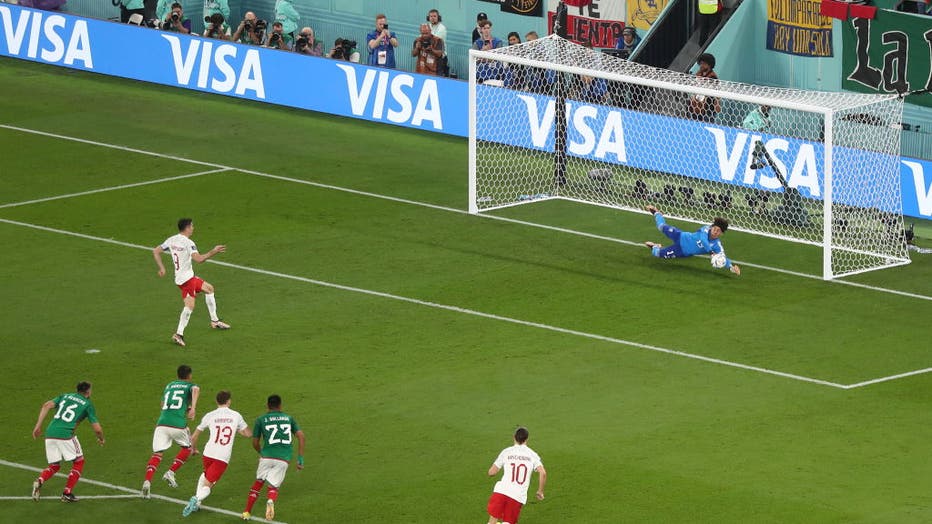 DOHA, QATAR - NOVEMBER 22: Robert Lewandowski of Poland has his penalty saved by Guillermo Ochoa of Mexico during the FIFA World Cup Qatar 2022 Group C match between Mexico and Poland at Stadium 974 on November 22, 2022 in Doha, Qatar. (Photo by Jame

When Would Mexico Play Next?

Mexico cannot win Group C. If they do advance in the tournament they are a lock to play against the winner of Group D Sunday, Dec. 4 at 10 a.m. ET.

France, the reigning World Cup champions, are currently on top of Group D, but there is an outside chance that Australia could come in first in the group.