CHICAGO - After a taste of spring weather, Chicagoans will get hit with high wind gusts, showers, thunderstorms and possible lakeshore flooding.

The wind advisory takes effect in northern Illinois from 7 p.m. Thursday to 10 a.m. Friday, according to the National Weather Service.

Gusts could top off at 55 mph, especially near the lake, the advisory states. Sustained northerly winds could blow at 25 to 35 mph, with the strongest winds expected around 9 p.m Thursday.

Steady rain was expected to expand across the region later Thursday. Another round of showers will arrived Friday night or early Saturday, with a few thunderstorms possible, according to the weather service. 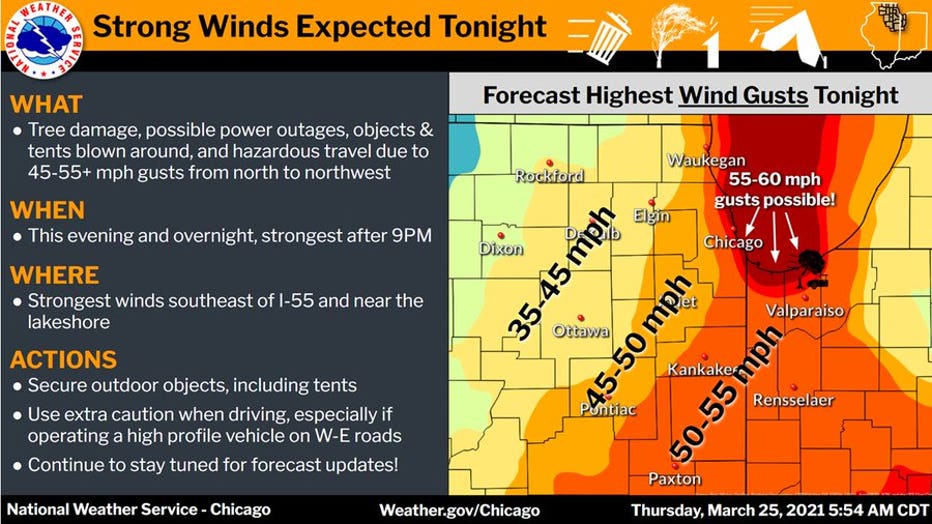 Gusts could top off at 55 mph, especially near the lake, the advisory states. (National Weather Service)

Meanwhile, waves on the shores of Lake Michigan could reach up to 14 feet high, and the lake level could rise by a foot, forecasters said. A lakeshore flood advisory was in effect from 9 p.m. Thursday until Friday morning.

Chicagoans were warned to steer clear of the and to secure loose objects. Drivers should also be on the lookout for puddles and ponds on roads.