Chicago - We have been spared so far this winter of any truly bitter cold or big snows. All that could change by the end of this week.

A polar plunge is coming that could send wind chills dipping down to 20 degrees below zero or even colder by Saturday morning. Prior to the polar plunge a blizzard could dump several inches of snow in the Chicago area.

Chicago weather: First the snow, then the life-threatening cold

Let me caution that the cold that is coming is more certain than the actual amount of snow that could fall. I will share some snowfall projections for Chicago but please take them with a grain of salt or two. The computer models seem to be coming into more agreement that a major storm is coming, but snow amounts have been varying between each model run. Forecasting exact totals nearly a week ahead of time is tricky.

With that in mind, let's look at two computer models for a snowfall forecast. 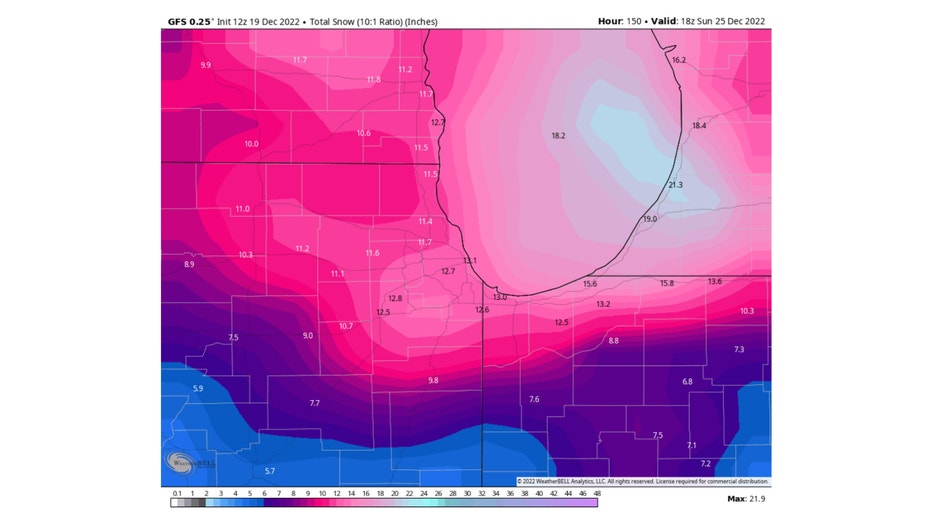 The GFS model (or American model) has nearly all of us seeing about a foot of snow by Christmas morning. Most of that would come late Thursday into Friday. 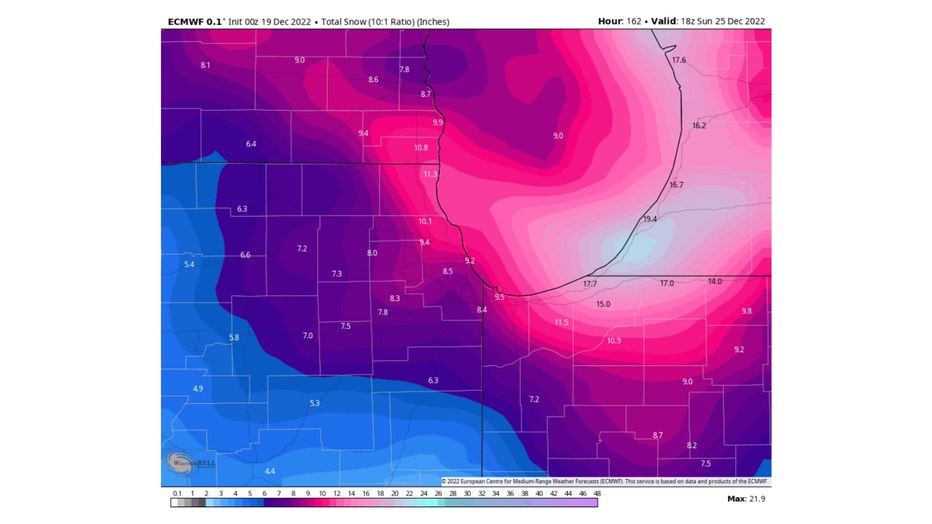 The ECMWF (or European model) squeezes out around 7 inches to a foot of snow for most of us by early Sunday morning. Heavier amounts (up to 18") are projected for portions of north central Indiana.

These models assume a 10:1 ratio of snow to liquid which is typical for most storms. This storm will probably produce a lighter, fluffier snowfall so the ratio will be higher. That means the projections from these models are probably underestimating the snowfall.

Those numbers are bad enough but when you whip up some of that snow with strong winds, there could be very hazardous travel at times. Parts of the area may very well experience blizzard conditions. 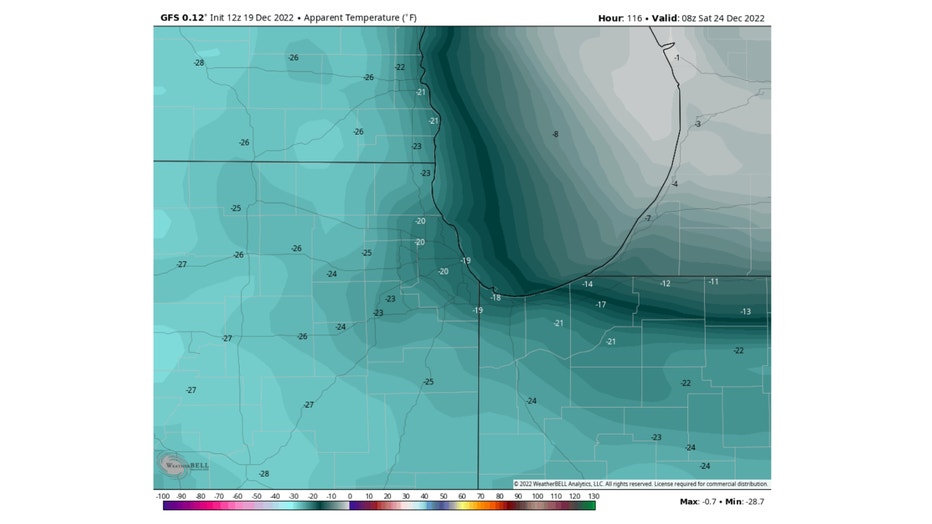 Bitter cold air will wrap behind this storm sending our wind chills well below zero by early Saturday. The GFS model has wind chills dipping down to more than 20 degrees below zero in parts of the area.

There are a lot of elements to this weather system to consider from the bitter cold to significant snowfall.

The biggest impact should be Thursday night and into Friday with a combination of heavy snow and winds gusting over 40 mph. 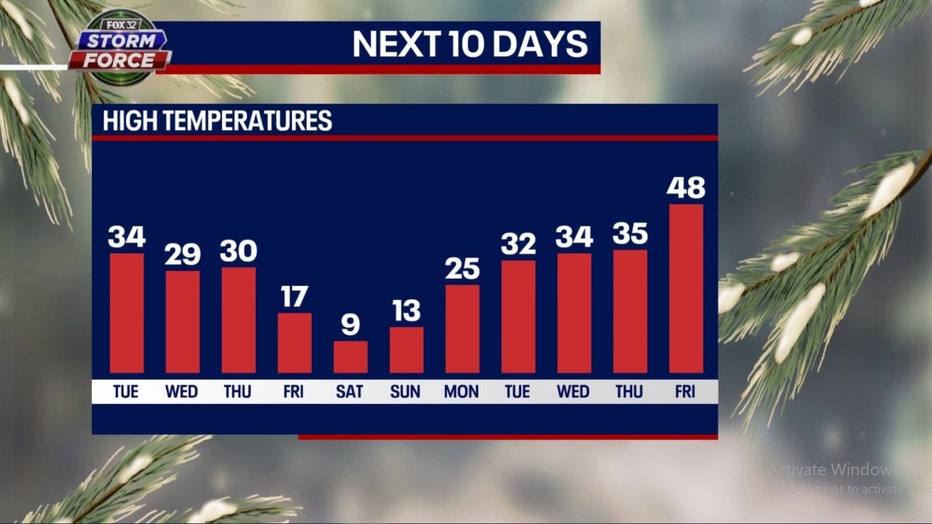 Chicago is not the only place that will be hit by the far-reaching, highly impactful storm system. Millions of people will be affected starting Wednesday, with peak impacts expected from Thursday through early Saturday (Christmas Eve).

"It is going to be mainly those of you in the Upper Midwest," FOX Weather meteorologist Jason Frazer said. "We're talking about places like Milwaukee and Green Bay (Wisconsin) that have a good chance of seeing some significant snow."

This winter storm will likely have a significant effect on travel.

"It could be very, very difficult indeed," Sinclair said. "We're anticipating hundreds of thousands of breakdowns during the year-end holiday travel period. You throw in a bad snowstorm into that, and it really wreaks havoc."

Sinclair said about half of all bad weather-related crashes occur during one season – winter. And it's upwards of about 2,000 fatalities and more than 500,000 injuries because of snow and ice.

Now the good news. It appears this blast of cold air will be fairly brief. Our model has the core of the cold arriving for Friday through Sunday but temperatures bouncing back quickly next week. We could be back up to freezing by Tuesday and near 50 degrees by a week from Friday.

The long-term forecasts from the Climate Prediction Center seems to agree with this scenario. They have us transitioning from a bitter cold pattern to a more mild pattern. 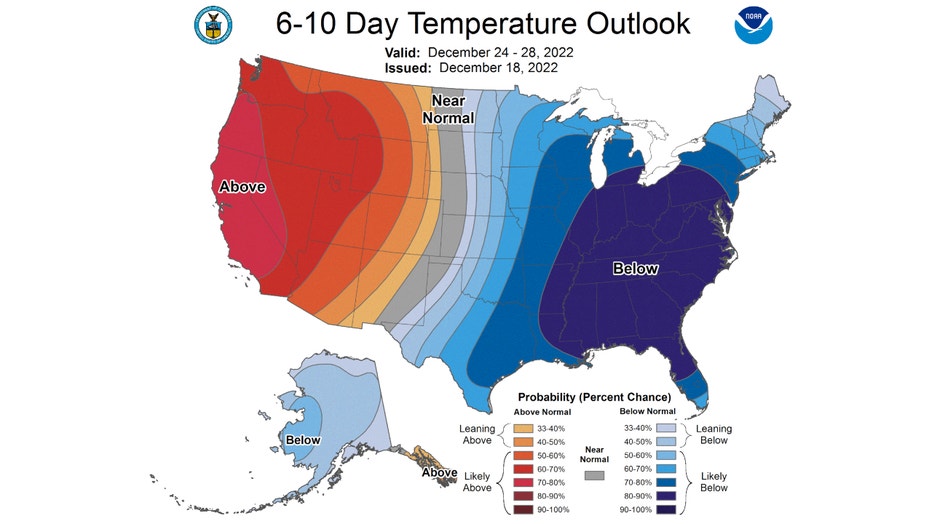 The 6-10 day temperature outlook has us forecast to be "likely below" average overall from Christmas Eve through next Wednesday. It is a strong signal with a 70-90 probability. 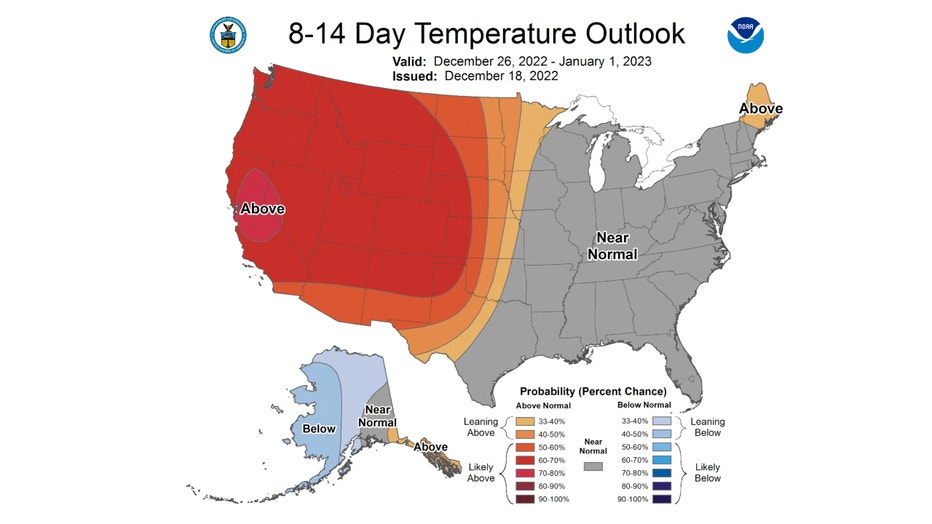 The 8-14 day temperature outlook then suggests we move into a milder pattern. It has us near normal overall from next Monday through New Year's Day. There is a growing part of the country warming up out west that is expanding eastward towards us in this forecast.

The snow and cold that are coming by the end of the week may seem like a shock to our system. So far we have seen 2.9 inches of snow. On average, we should have seen 3.9 inches by now. So far this winter has been relatively mild with December now about 2.3 degrees above average overall. That all changes in just a few days. Just how big of a change that is actually coming is still being determined but there is little doubt that bitter cold and sticking snow will be here by the end of the week. Welcome to winter!

FOX Weather contributed to this report.