Chicago - Snow in March should come as no surprise. After all, it is the fourth snowiest month of the year with an average of 5.5 inches.

Snow is tough to take though after a high near 70 degrees just two days ago. Weather whiplash at its worst.

The most recent big snow to strike in March happened almost exactly nine years ago when 9.2 inches fell at O'Hare on March 5 of 2013. It was the biggest snowfall of that winter and the fourth-biggest March snowfall on record. 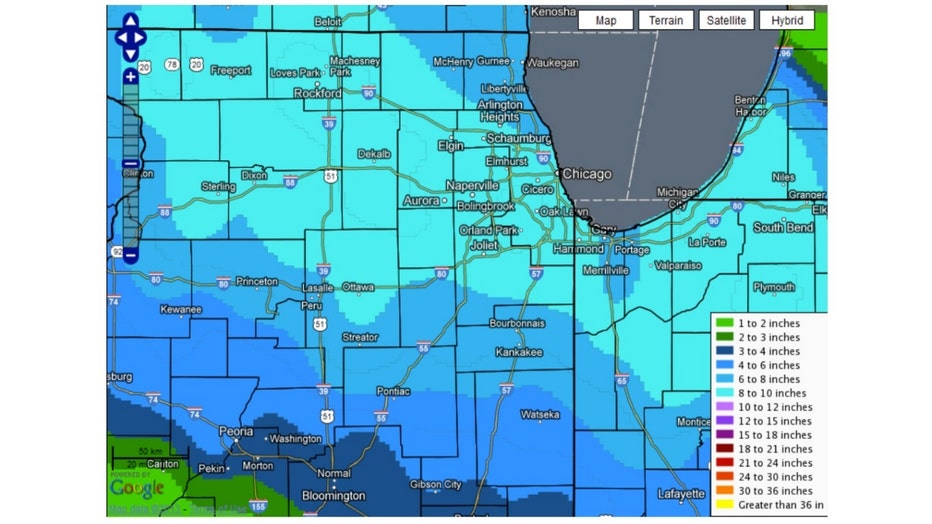 Parts of Will County were walloped with nearly a foot of snow while most of our area saw between 5 and 9 inches.

We started this week off with some wet March snow. Monday's system produced about 1 to 3 inches on average with a few spots picking up nearly 4 inches. Another round of snow could be coming for Thursday night into Friday.

The accumulated snowfall meteogram compares several forecast models. This early outlook shows models spitting out between around 1 to 4 inches of additional snow.

I need to invoke my standard words of caution: it is early and the numbers will probably change, so stay tuned. 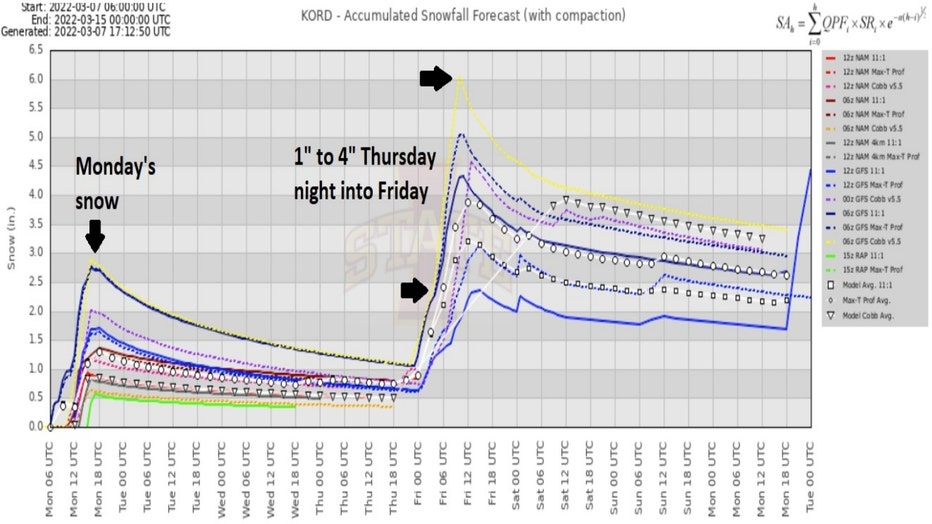 The GEFS model ensemble compares 21 separate forecasts, or ensemble members. The initial conditions are "perturbed" minutely from the original observations and then the model is run out several times to compare the solutions (or forecasts) to see how much uncertainty there is.

The latest model plumes show a range of around 1 to 4 inches for this next round of snow with a median value of nearly 2 inches. That second bump represents this next round of snow, but the first bump represented Monday's snowfall. The first snowfall forecast amounts were subtracted from the second set of numbers to come up with the 1 to 4 inch forecast. 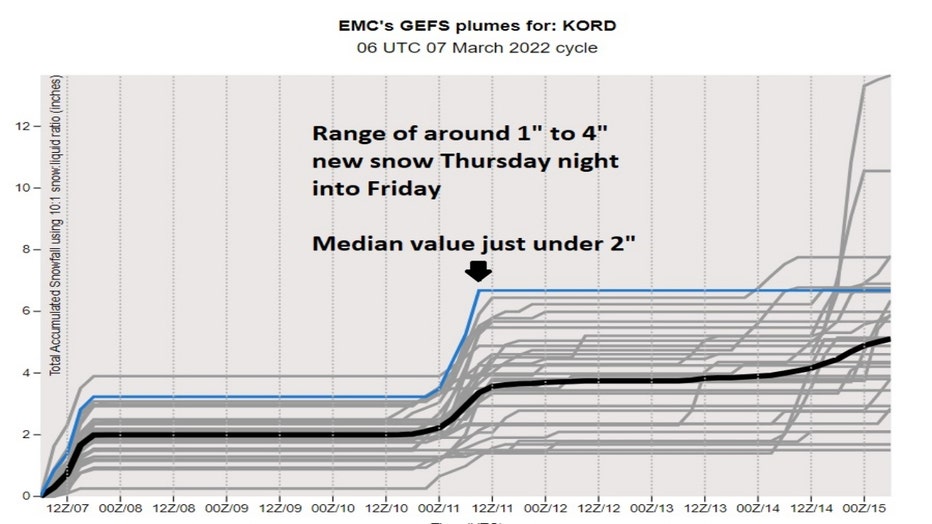 The forecasts so far are focused on O'Hare. Looking at a single model, in this case the GFS model, we can get more of sense for the variation in snowfall amounts in the forecast for all of northern Illinois and Indiana.

Keep in mind that this model run includes about 1 to 2 inches of Monday's snowfall, so we need to subtract it from the totals below. That yields a snowfall forecast for Thursday night into Friday of around 1 to 3 inches. 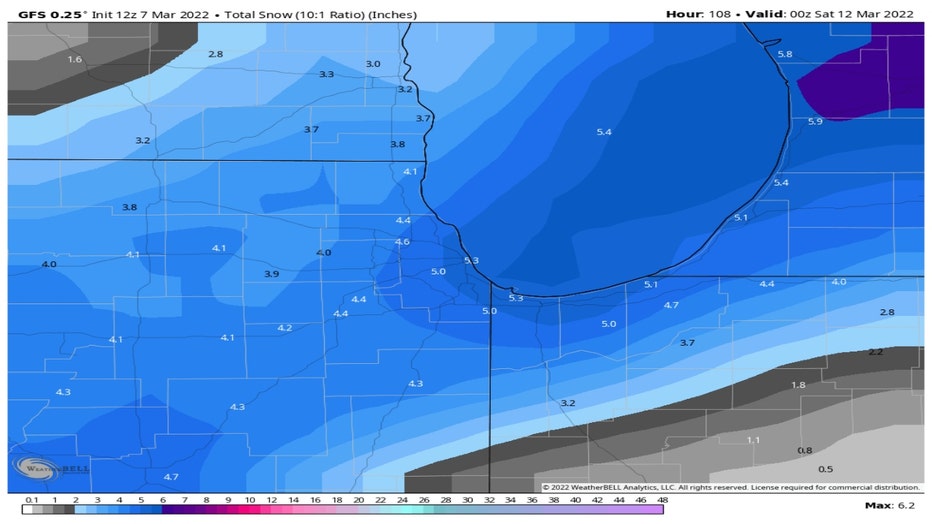 Models have been consistent in bringing in unseasonably cold air for the end of this week and start of this weekend. The National Blend Of Models has our highs dropping into the lower 30s for Friday and only upper 20s for Saturdays with lows both Saturday and Sunday morning in the middle teens. Average highs for the middle of March are in the middle 40s and average lows are near 30 degrees. 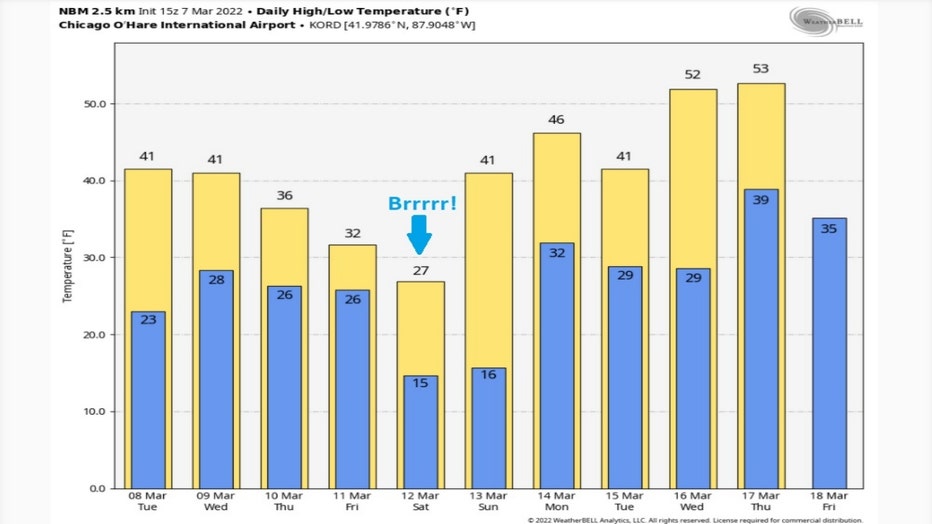 Monday's snow should melt off quickly with some March sunshine on Tuesday and anything we pick up late this week will also melt fast. Highs recover into the 40s by Sunday and might warm into the 50s by the middle of next week.