CHICAGO - A Lake County judge won the Democratic nomination in the race to succeed retiring Justice (and former Chicago Bear) Bob Thomas on the Illinois Supreme Court Tuesday night, and a former sheriff held a narrow lead in the Republican primary.

With 100% of precincts reporting, Democrat Elizabeth Rochford had 44.4% of the vote to 28.6% held by Highland Park Mayor Nancy Rotering in the newly redrawn 2nd District covering DeKalb, Kendall, Kane, Lake and McHenry counties.

Rochford and Shanes had been considered favorites in their primaries. Each of them had more campaign money than their rivals by more than two-to-one.

Rochford spent election night with supporters at a restaurant in Lake Bluff. "We’re feeling really optimistic," she said in an interview. "We ran exactly the campaign we hoped to run, positive, we had a good message." 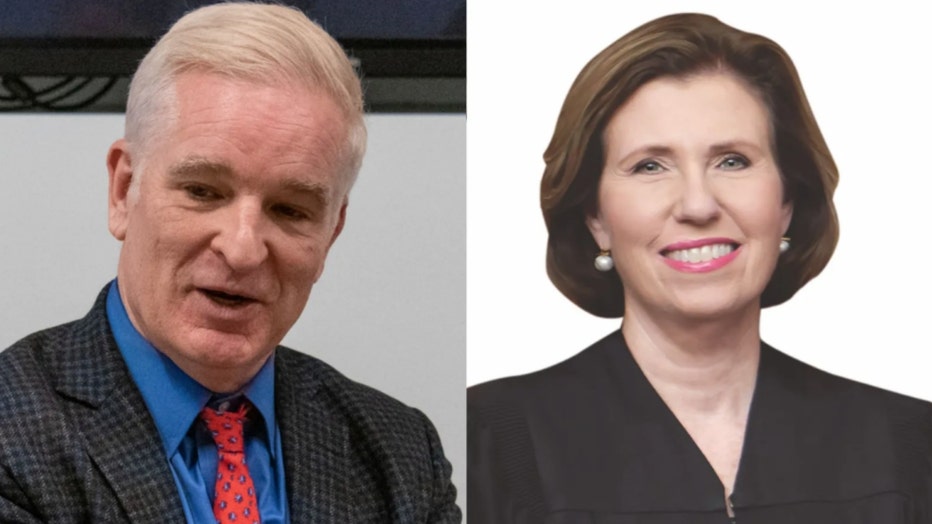 Democrats will have to win either the 2nd District seat or the 3rd District seat — in DuPage, Will and other southwest counties — in the fall to maintain their dominance of the state’s highest court, which currently stands at 4 to 3.

The 3rd District seat — where Democratic Justice Thomas Kilbride lost his bid for retention two years ago — was uncontested in the primary. Republican Michael J. Burke and Democrat Mary K. O’Brien will face off in November.

Rochford has indicated her support for abortion rights, and wrote Monday on her Facebook page that she’s "endorsed by the Illinois leaders who wrote some of the strongest laws in our nation on women’s rights."

Shanes has not been forthcoming about indicating position on abortion and declined to comment on it during an interview with the Sun-Times. Curran told the Sun-Times he’s "pro-life."

While Rochford and Shanes are both rated "highly recommended" by the Illinois Bar Association, Curran — who’s never been a judge — was rated "not recommended."

But Curran has said he makes up for that with experience teaching constitutional law and as a prosecutor.

Curran was initially tossed from the primary ballot earlier this year by the State Board of Elections for not having enough signatures. But a Cook County judge later reinstated Curran, as well as Hutchinson and Rotering.

While Shanes and Rochford had considerable coffers — Rochford with nearly $700,000 cash on hand, and Shanes with near $400,000 — Curran had about $10,000 in campaign cash, according to public finance records.

Shanes has been a Lake County Circuit Court judge for 16 years, serving now as the chief deputy judge. He started as a Lake County assistant state’s attorney in 1995.

Shanes is endorsed by the Illinois Fraternal Order of Police and has said in campaign advertisements that "restoring the rule of law is on the ballot."

Rochford has been a Lake County judge since 2012 and currently handles guardianship cases in probate court. She started as a Cook County assistant state’s attorney, moved to private practice, then spent 23 years as commissioner of the Illinois Court of Claims and a judge for the past nine.