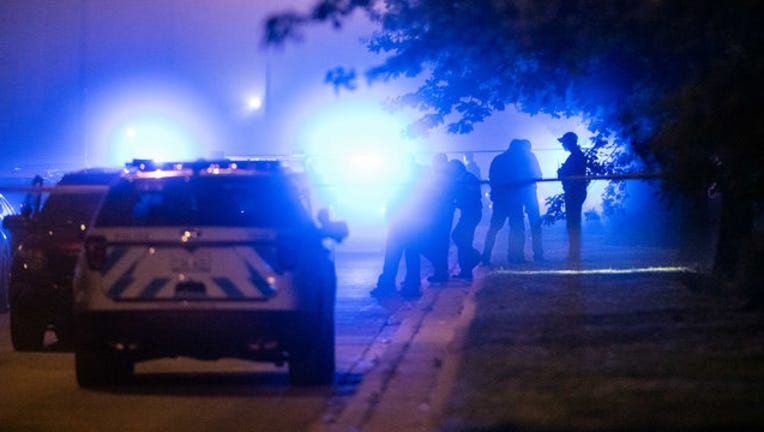 Chicago police investigate the scene where multiple people where shot, Thursday night, in the 6200 block of South Indiana. | Tyler LaRiviere/Sun-Times

CHICAGO (Sun-Times Media Wire) - Fourteen people were wounded — one fatally — in shootings Thursday within city limits, including a man who was traveling with three others on North Lake Shore Drive.

The four were northbound in a Honda Odyssey in the 2500 block of Lake Shore Drive just before midnight when someone in a vehicle fired shots, Chicago police said.

A 20-year-old man was hit in the chest and pronounced dead on the scene, police said. He was identified as Michael Medina of Back of the Yards on the South Side, the Cook County medical examiner’s office said.

The 20- and 26-year-olds were taken to Illinois Masonic Medical Center, and the 22-year-old was taken to Northwestern Memorial Hospital, police said.

In non-fatal shootings, another group of men was shot earlier in a Washington Park drive-by.

The trio was standing on the sidewalk about 9:40 p.m. in the 6200 block of South Indiana Avenue when someone in a white vehicle fired shots, police said.

A 27-year-old was shot in the leg, and a 22 and 24-year-old were shot in the foot, police said. Their conditions were stabilized at the University of Chicago Medical Center.

About two hours earlier, two people were wounded by gunfire on the I-94 expressway on the Far South Side.

Troopers responded to the northbound I-94 feeder ramp to southbound I-57 about 7:35 p.m., Illinois State Police said.

There, they found one person with injuries and a rolled-over Nissan, state police said.

A 25-year-old man in the vehicle was taken Christ Medical Center in Oak Lawn with a gunshot wound to his thigh, Chicago Fire Dept. Deputy Chief Curtis Hudson said. He was in serious condition.

Another man, 22, took himself to MetroSouth Medical Center in Blue Island, state police said. He was shot in his shoulder, knee and grazed in the head. His condition was stabilized.

Around the same time, A man was shot in the leg while playing basketball outside an elementary school in Garfield Park.

The 25-year-old was at a court about 7:45 p.m. in the 3900 block of West Wilcox when gunfire erupted, Chicago police said. His condition was stabilized at Mount Sinai Hospital.

A 27-year-old man was walking about 10:07 p.m. in the 7800 block of South Evans Avenue when someone fired shots, police said. He took himself to South Shore Hospital in an unknown condition with a gunshot wound to the knee.

A few minutes laters, a teen was one of two hurt in West Pullman when someone fired shots about 10:15 p.m. in the 11800 block of South Halsted Street, police said.

The 17-year-old was shot in the buttocks, and a 22-year-old was struck in the leg, police said. They took themselves to MetroSouth Medical Center in Blue Island where their conditions were stabilized.

The shots may have come from a dark-colored vehicle, but the two were “uncooperative” with investigators, police said.

A 63-year-old man was wounded in the day’s earliest shooting in South Shore.

He was riding a bicycle about 1:45 a.m. in the 7600 block of South Paxton Avenue when someone in a light-colored van fired shots, Chicago police said.

He was hit in the leg and was taken to the University of Chicago Medical Center where his condition was stabilized, police said.