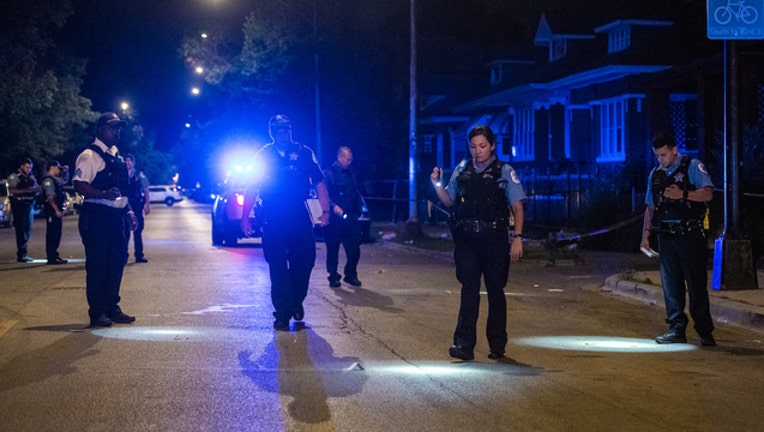 Chicago police investigate the scene where 5 people were shot, Saturday morning, in the 7900 block of South Loomis, in the Gresham neighborhood. | Tyler LaRiviere/Sun-Times

CHICAGO (Sun-Times Media Wire) - A person was killed and four others wounded Saturday when someone in a vehicle opened fire in Gresham on the South Side.

They were gathered on the sidewalk about 2:58 a.m. in the 7900 block of South Loomis Boulevard when a gray sedan drove up, Chicago police said. Someone in the vehicle unleashed gunfire, striking the group, before driving off north on Loomis.

Daquan Cathery, 24, was hit in the chest and taken to Christ Medical Center in Oak Lawn where he later died, police and the Cook County medical examiner’s office said. He lived in Washington Heights.

Another man, 31, was hit in the back and chest, police said. He was taken to the same hospital in critical condition.

Two people were taken to the University of Chicago Medical Center: a 27-year-old man struck in the leg and a 29-year-old woman hit in the hip, police said. Their conditions were stabilized.

A 37-year-old man who was grazed in the wrist refused medical treatment, police said.