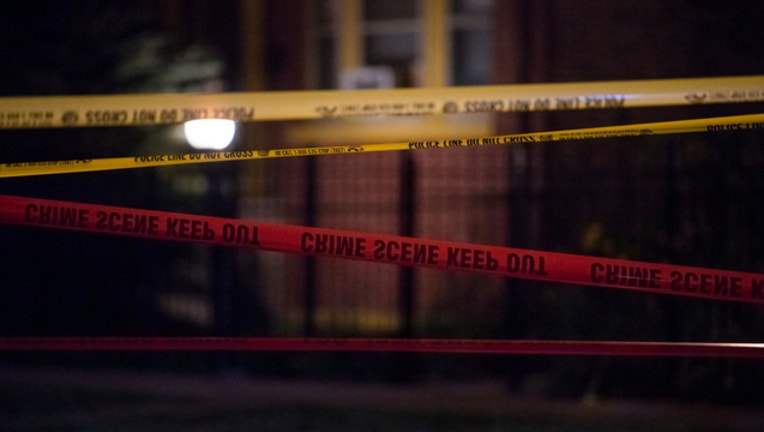 Police investigate the scene where a man was shot and killed Monday night in the 5700 block of South Winchester. | Tyler LaRiviere/Sun-Times

CHICAGO (SUN TIMES MEDIA WIRE) - One man was killed and seven others were wounded, including two men who were shot while driving, between 12:20 a.m. and 11:59 p.m. Tuesday in shootings across the city.

One person was taken into custody in connection with the day’s only fatal shooting, which happened in the South Side Back of the Yards neighborhood, according to Chicago police.

At 6:57 p.m., a 29-year-old man was sitting inside a vehicle in the 4100 block of South Ashland when a male walked over and fired multiple shots at him, police said.

The 29-year-old was taken to Stroger Hospital, where he was pronounced dead, police said. The Cook County medical examiner’s office did not immediately confirm the death.

The suspected shooter drove away in a vehicle with at least one other person inside, police said. A CPD officer stationed nearby witnessed the gunfire and proceeded to tail the suspect.

The people inside the vehicle later attempted to run away on foot but after a brief chase, they were placed into custody. Weapons were recovered from them, police said. No charges had been filed as of Wednesday morning.

The most recent non-fatal shooting happened at 11:59 p.m. in the Portage Park neighborhood on the Northwest Side.

Two people were injured, one shot, when a man was shot while driving and crashed his vehicle into a CVS, police said.

The 23-year-old man was driving when someone in a passing car fired shots, striking him in his head, arm and torso in the 5800 block of West Addison Street, according to police.

While trying to drive away from the shooting, he crashed into the CVS in the 3600 block of North Central Avenue, police said.

A passenger in the vehicle, a 28-year-old woman, suffered blunt trauma to her arm in the crash, police said. She was not shot.

The two took themselves to Community First Hospital but were being transferred to Illinois Masonic Medical Center. The man was in serious condition and the woman’s condition had stabilized, police said.

Another man was also shot while driving less than an hour earlier in the Logan Square neighborhood on the Northwest Side.

The 31-year-old was driving when he heard glass break and realized he had been shot in his shoulder at 11:13 p.m. in the 2600 block of North Troy, according to police.

He was taken to Swedish Covenant Hospital where his condition was stabilized, police said.

He told police he did not know where the shots came from.

At 8:47 p.m., another man was shot in the Jefferson Park neighborhood on the Northwest Side.

The 28-year-old was sitting in the back of a vehicle in the 5300 block of West Leland when he heard gunshots, felt pain and realized he had been shot multiple times, police said.

He was taken to Lutheran General Hospital in Park Ridge where he was in critical condition, police said.

Two more men were shot — one unintentionally — Tuesday evening in the Austin neighborhood on the West Side.

At 7:26 p.m., the 59-year-old and 26-year-old were inside LaFollette Park in the 1300 block of North Laramie when someone walked over and fired shots at them, according to police.

Only the 26-year-old was believed to have been the target, police said.

Just after midnight, a man was shot while riding in a vehicle in the Archer Heights neighborhood on the West Side.

The 21-year-old was a passenger in a vehicle when someone in another vehicle fired shots at 12:22 a.m. in the 5200 block of South Kostner, according to police.

He was shot in the shoulder and was taken to MacNeal Hospital where his condition was stabilized, police said.

The shots may have been fired from a beige Ford Explorer, police said.

Two minutes earlier, the first shooting of the day left a man with four gunshot wounds in the Chatham neighborhood on the South Side.

The 24-year-old was walking down the street when a black Chevrolet truck drove by and someone inside fired shots about 12:20 a.m. in the 8400 block of South Dante, according to police.

He was shot once in his arm, once in his side and twice in his hip, police said. More than 40 shell casings were found at the scene.

He was taken to Trinity Hospital where his condition was stabilized, police said.

On Monday, two people were killed and four others were wounded in shootings on the South Side and West Side.