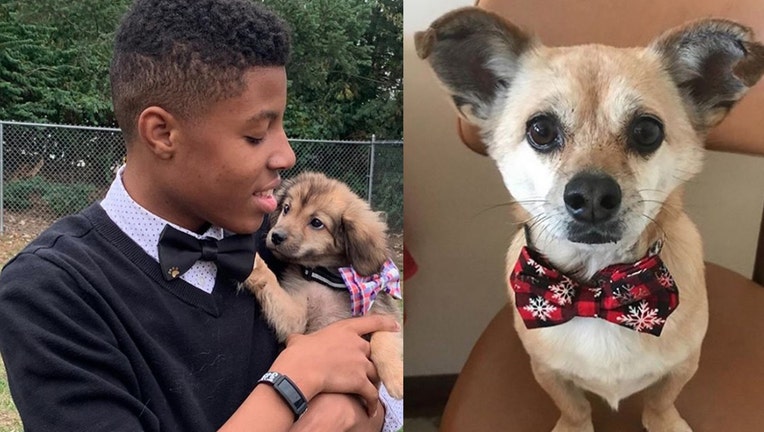 NEWARK, N.J. - Sir Darius Brown is on a mission: to get every animal living in a shelter a loving forever home.

While other 13-year-old's are busy with video games or watching the latest YouTube series, the New Jersey teenager sews bow ties and sends them to animal shelters across the country. The bowties are used during photo shoots for shelter pets to make them look even more adorable and hopefully, landing them the perfect home.

Sir Darius was born with a fine motor skills delay, so at 8-years-old, his mother had him help his sister who was sewing her own hair bows. He worked as her 'assistant' helping to cut fabric and using the sewing machine.

His sister then had him try his hand at making bow ties.

MORE NEWS: This blind pug and his seeing-eye Chihuahua are looking for a forever home together

Two years later, in 2017, Hurricane Harvey and Hurricane Irma struck Texas and Florida. Sir Darius saw videos of animals being shipped to shelters near him from the affected states and he wanted to help. So he put his bow tie-making skills to the test and donated them to shelters to make the animals look cute and dapper.

He started off making 10 to 15 bow ties a week, but the more he donated, the more the demand grew from shelters around the country.

"The hardest part about going to the animal shelters is I always get attached and it's so hard to leave," Sir Darius said.

Since starting his mission, Sir Darius estimates he has made 400 to 500 bow ties, helping more than 100 animals find their forever home.

His Instagram page is filled with photos of shelter pets wearing his colorful bow ties.

Sir Darius was recently named the GoFundMe Kid Hero of January 2020. He is continuing his PAW-SOME Mission this year by mailing bow ties to shelters around the nation and will be visiting more states this summer.

You can help support his mission HERE.