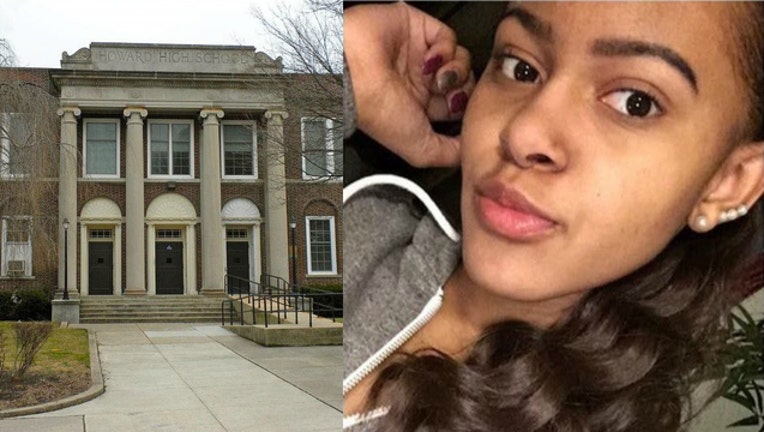 The victim was a 10th-grader from New Castle who had gotten involved in a confrontation involving two other students at Wilmington's Howard High School of Technology, spokeswoman Kathy K. Demarest said in a statement. She said no weapons were involved. Police are questioning the other students, Demarest said.

Student Kayla Wilson said she was in a stall in the girl's restroom when the fight broke out.

"She was fighting a girl, and then that's when all these other girls started banking her — like jumping her — and she hit her head on the sink," Philadelphia TV station WPVI quoted Wilson as saying about the victim.

Neither Demarest nor police released the victim's name or would say how she died. Officers were first called to the school about 8:15 a.m. as students were arriving for the day, Demarest said.

Police Chief Bobby Cummings said Howard isn't known as a violent school, and he did not know of any other problems in recent days.

"My heart bleeds for the family," Mayor Dennis Williams told a news conference.

State agencies will help provide support for those affected by the tragedy, Gov. Jack Markell said in a statement.

Wilmington City Councilwoman Sherry Dorsey Walker said she has known the victim and her family for quite some time and had been asked by the family to speak on their behalf.

The family is asking for calm and prayers in the community, she said, not retaliation.

"They're just asking people to ... be calm and pray for them," she said.

Dorsey Walker described the victim as "a wonderful human being."

"Her loss is a big void, not just in the family," she said.

Demarest said students were kept in their classrooms after the fight, and school was dismissed at 10:15 a.m.

A public forum for mayoral candidates to discuss public safety had been scheduled at the school Thursday evening. Debate host WHYY said on its website that the event had been canceled.