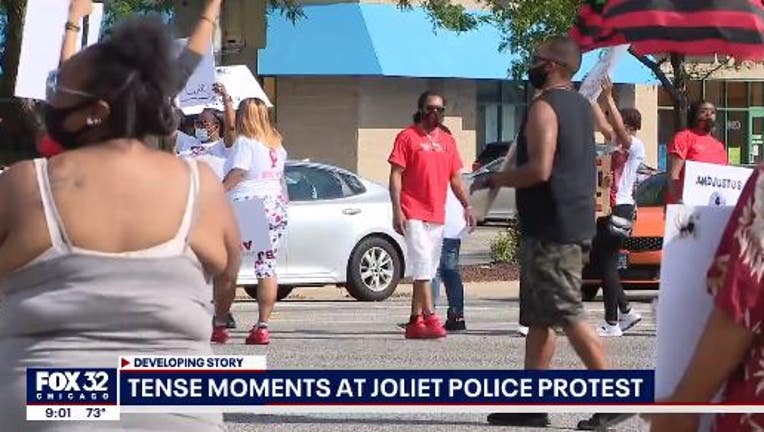 JOLIET, Ill. - There were tense moments in Joliet Sunday afternoon as two men got arrested at a peaceful protest honoring the life of Eric Lurry who died in police custody in January.

One of the men taken into custody was a community activist, well known for quelling the violence. Today as police handcuffed him, the crowd shouted, “Let him go!”

Handcuffs were placed on him as he was led into a squad car two hours into the peaceful protest that spilled onto the streets of Joliet.

They effectively shut down traffic at Jefferson and Larkin and that angered some drivers who got stuck waiting. Cops then urged protesters to get back on the sidewalk.

“And we only just trying to get our word out here and we felt like we was getting attacked by the Joliet police officer and this is a peaceful protest,” said Simmons.

“And they have this tactic that they do when we have peaceful protests like this that they try to agitate us,” said Steven Newell.

Protesters came to draw attention to the death of Eric Lurry after video shows an officer pinched Lurry’s nose and held it for over two minutes.

“People have to understand that this isn’t just about today, this has been going on not just in America, but in Joliet for a long time,” said Ernest Crim III.

Lurry supporters held signs and squared off with police.

“I’m hurt. I’m thankful that I got all the support of Joliet to come out here and get justice for my husband because what JPD did wasn’t right,” said Nicole Lurry, wife of the deceased.

Nicole Lurry wants the officers involved in her husband’s case to be fired. She got to see and speak with the chief at the rally, but he told her he won’t express an opinion just yet.

In March, the Will County coroner’s officer classified Lurry’s death an accident due to heroin, fentanyl and cocaine. The case is still under review by the Major Crimes Task Force.

“And that’s why I’m standing here today because enough is enough. We’ve been silenced too long and we want to bring that to the forefront,” said Loretta Hobbs.