Two men are charged with murdering a father stringing Christmas lights at his Gage Park home while on a nearly five-hour crime spree during which they beat and robbed at least 13 other people, according to police.

CHICAGO - Two men were charged Thursday in the beating death of a 49-year-old father who was hanging up Christmas lights in Gage Park as part of a 5-hour crime spree on Chicago's Southwest Side.

Moises Barrios, 23, and Pedro Mendiola, 21, each face over 20 charges in a crime spree that had 14 victims including Jose Tellez, a father of three, whom they beat to death, police said.

On Dec. 11, the pair repeatedly struck Tellez with a crowbar and baseball bat as his young daughter watched from inside the home in the 3500 block of West 58th Street, police said. 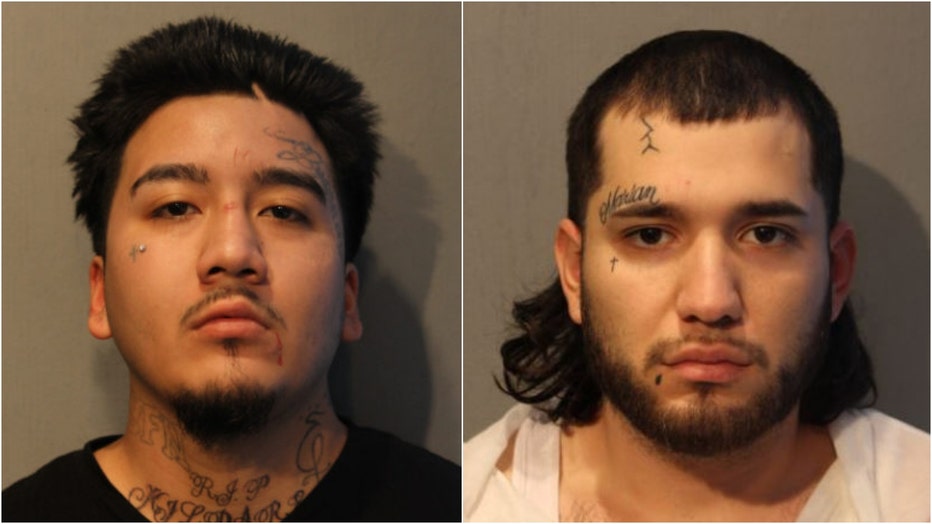 The two traveled from the North Side to the South Side from 3:30 p.m. to 8 p.m. that same day, committing multiple robberies and attacking several people, police said.

Barrios and Mendiola each face 9 counts of aggravated battery and use of a deadly weapon and 10 felony counts of armed robbery, police said.

"There are no words for this senseless and heinous act of violence and there are no words that can lessen the pain and trauma Mr. Tellez's daughter and family have endured," Chicago Police Supt. David Brown said at a Friday news conference. "When one life is claimed by senseless violence, that is one life too many."

Two men are charged with murdering a father stringing Christmas lights at his Gage Park home during a nearly five-hour crime spree during which they beat and robbed at least 13 other people, according to police.

Tellez was beloved by his community.

Neighbor Silverio Nodal said he knew Tellez for about 10 years and described him as "a family man, a hardworking guy."

Chicago man beaten to death while decorating home for Christmas

A father of three was beaten to death Saturday while putting up Christmas lights outside his Gage Park home on the Southwest Side.

Tellez's niece, Daisy Torres, described him as a hard worker who would never hurt anyone.

"He was someone you always relied on. He loved to dance and parties, and was a very funny person," Torres said. "He had a kind heart, and kindhearted people don’t deserve this."