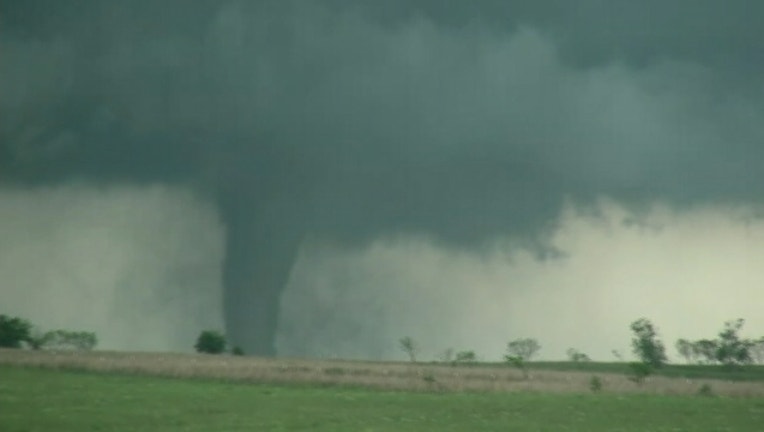 OKLAHOMA CITY (AP) - Tornadoes swept across portions of the Plains on Monday, killing two people in Oklahoma including an elderly man who was inside a home that was torn apart by one of the violent storms.

An emergency management director said a man believed to be in his upper 70s died when a tornado hit a home near Wynnewood, south of Oklahoma City. Authorities also confirmed the death of a man near the town of Connerville, Johnston County Sheriff's Office Sgt. Stacey Pulley said.

The storm was considered so violent that forecasters declared a "tornado emergency" for communities in the twister's path.

"You are in a life-threatening situation," forecasters declared while warning the communities of Roff, population 725, and Hickory, population 71, which were ultimately spared major damage. "Flying debris will be deadly to those caught without shelter."

Dana Lance was driving through the Pontotoc County community of Roff on her way home from work Monday when the skies grew ominous, and she heard tornado sirens and forecasters on the radio urging people in the area to take cover.

"I parked and went into the school, which has a safe room," Lance said. "There were kids and elderly people, dogs and cats, babies. It was like the whole town was there."

One person sustained minor injuries in Murray County, where the tornado moved slowly through a rural area on its path that would take it south of Roff, said Gary Ligon, Murray County's emergency management director.

Ligon said the injured person was taken to a hospital but the nature of the injury was not immediately known.

The Storm Prediction Center in Norman, Oklahoma, warned that twisters as far north as Nebraska and Iowa could develop late Monday night.

The bad weather should settle in the Ohio and Tennessee valleys on Tuesday, forecasters said, while another storm system should bring bad weather to the area from north Texas to near St. Louis on Wednesday.

Monday's series of violent thunderstorms dropped tornadoes near Oklahoma City and in the rolling hills south of the city, destroying some homes and barns. The Oklahoma Highway Patrol closed Interstate 35 near Wynnewood for 15 minutes Monday so the storm could pass, temporarily shutting down the primary route between Oklahoma City and Dallas.

Garvin County Emergency Management Director Bud Ramming said early Monday evening that the fatality was the only known injury reported to his office.

About 41 million people from Houston to Sioux City, Iowa, were at risk for some type of stormy weather.

Associated Press reporters Sean Murphy and Tim Talley from Oklahoma City, and Justin Juozapavicius from Tulsa contributed to this report.