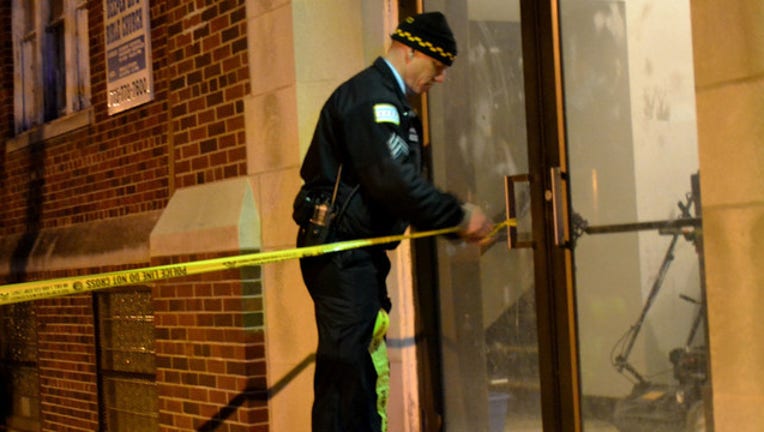 Chicago police set up a crime scene on the 3100 west block of 60th St where a woman was shot in the stomach this morning. | Justin Jackson/ Sun-Times

CHICAGO (Sun-Times Media Wire) - Two men were killed and at least 17 other people, including a 12-year-old boy and a 13-year-old boy, have been wounded since Friday evening in weekend gun violence across Chicago.

The weekend’s latest fatal shooting happened Saturday morning in the South Side Morgan Park neighborhood. Two men were standing about 11:15 a.m. in the 1300 block of West 110th Place when someone in a white sedan fired shots, according to Chicago Police.

Jamon Harris, 20, suffered a gunshot wound to his chest and was pronounced dead at 11:55 a.m., police and the Cook County Medical Examiner’s Office said. He lived in the same neighborhood as the shooting.

A 23-year-old man was shot in the leg and struck by a vehicle, police said. He was taken to Christ Medical Center in Oak Lawn in critical condition.

The first fatal shooting happened early Saturday when a man was killed and another was wounded in the West Side Humboldt Park neighborhood, police said. The men were arguing with someone about 12:20 a.m. when the other person opened fire in the 2500 block of West Division.

Antonio Reyes, 38, was shot multiple times in the body and pronounced dead at the scene at 1:09 a.m., authorities said.

A 28-year-old man was shot in the hip and taken to Stroger Hospital in serious condition, police said. Detectives detained two “persons of interest” and were questioning them Saturday morning.

The weekend’s latest shooting happened early Sunday in the South Side Englewood neighborhood. A 24-year-old man was walking about 4 a.m. in the 7300 block of South Halsted when he heard a gunshot an was struck in a finger, police said. The man took himself to Holy Cross Hospital, where he was listed in good condition. He was uncooperative with investigators and would not provide additional information about the shooting.

Just over an hour earlier, a 23-year-old woman was shot in the Chicago Lawn neighborhood on the Southwest Side. The woman was driving a gray sedan at 2:57 a.m. through an alley in the 6000 block of South Troy when she heard shots and felt pain, police said. She was taken to Christ Medical Center in Oak Lawn, where her condition stabilized.

A 32-year-old woman showed up at Stroger Hospital about an hour earlier with gunshot wounds to her hip and upper body, police said. About 2 a.m., she was dropped off by acquaintance and listed in serious condition. The woman and her acquaintance were uncooperative with police and would not give details on the location or circumstances of the shooting.

At 1:35 a.m., a 33-year-old man was shot during a robbery in the West Side Austin neighborhood. He was walking on the sidewalk in the 5700 block of West Huron when several males approached and demanded his property, police said. The man tried to ran away and was shot in the right leg. He was taken to Stroger Hospital, where his condition stabilized.

About 12 hours earlier, a 13-year-old boy was shot in the South Side Back of the Yards neighborhood. The boy was in the 2000 block of West 52nd Street at 1:44 p.m. Saturday when he heard shots and felt pain, police said. He suffered a gunshot wound to his arm and was taken to Comer Children’s Hospital, where his condition stabilized.

On Friday evening, a 12-year-old boy was wounded in a drive-by shooting in the Lawndale neighborhood on the West Side. The boy was on foot about 10:15 p.m. in the 1600 block of South Hamlin when someone in a maroon Pontiac fired shots, striking him in the leg, police said. The boy was taken to Mount Sinai Hospital, where he was in good condition.

The weekend’s first shooting happened at 4:54 p.m. Friday when a 21-year-old man was shot in the Back of the Yards neighborhood on the Southwest Side. He was walking in the 5400 block of South Winchester when he heard shots and was struck in the leg, according to police. The man was taken in good condition to Holy Cross Hospital.

At least eight other people have been wounded in shootings across the city since Friday afternoon.