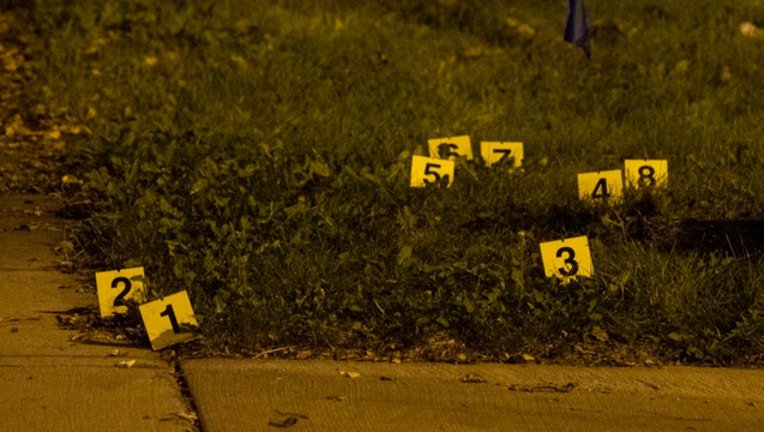 Police investigate the scene where a man was shot and killed Monday night in the 5700 block of South Winchester. | Tyler LaRiviere/Sun-Times

CHICAGO (SUN TIMES MEDIA WIRE) - Two people were killed and four others were wounded between about 1:25 a.m. and 11:45 p.m. in shootings on the South Side and West Side.

The most recent fatal shooting happened in the West Englewood neighborhood on the South Side.

Levon Averhart, 42, was standing outside when two males walked up to him and one took out a handgun and fired shots at 11:46 p.m. in the 5700 block of South Winchester, according to Chicago police and the Cook County Medical Examiner’s Office.

Averhart suffered a gunshot wound to his abdomen. He was taken to the University of Chicago Medical Center where he died, authorities said.

He lived in the South Side Gresham neighborhood.

Another man was killed at 9:53 p.m. in the South Side Gresham neighborhood.

Cornelius Jackson, 29, from south suburban Country Club Hills, was shot by a male who got out of a silver vehicle and fired shots, striking him in his head at 9:53 p.m. in the 7800 block of South Laflin, according to police and the Cook County Medical Examiner’s Office.

He was taken to Little Company of Mary of Hospital in Evergreen Park where he was pronounced dead, police said.

The most recent non-fatal shooting happened in the Morgan Park neighborhood on the Far South Side.

The 20-year-old was standing outside when he heard shots and felt pain at 11:41 p.m. in the 11100 block of South Halsted, according to police.

He was shot in his left elbow and was taken to Roseland Community Hospital where his condition stabilized, police said.

Earlier, a 31-year-old man was wounded in a drive-by shooting in the South Side Woodlawn neighborhood.

The man was walking about 8:45 p.m. in the 6500 block of South Drexel when two males inside a gray 2016 Chevrolet Malibu fired shots at him, according to police.

He was struck in the foot and taken to University of Chicago Medical Center in good condition, police said.

About two hours earlier, another man was wounded in the West Pullman neighborhood on the Far South Side.

About 6:25 p.m., the 27-year-old was talking to another person in the driveway of a home in the 12200 block of South Princeton when someone else walked up and shot him in the chest, according to police.

He was taken to Christ Medical Center in Oak Lawn, where his condition was stabilized, police said.

The first shooting of the day happened in the West Side Austin neighborhood.

About 1:25 a.m., a 35-year-old man was standing outside in the 4900 block of West Fulton Street when someone pulled out a gun and fired shots in his direction, according to police.

He was struck in his ankle and was taken to Stroger Hospital, where his condition stabilized, police said.

On Sunday, one person was killed and seven others were wounded in shootings across the city.